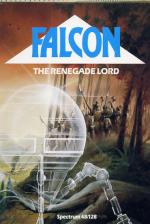 Falcon, agent of that future organisation TIME - Temporal Investigative Monitoring Executive - is out to clip the wings of a rebellious lime Lord intent upon meddling with precious time artefacts in this game based upon the popular Falcon book series.

Falcon's mission begins from his headquarters, the Eiger Vault, where his timecraft Falcon's Wing awaits. Inside the ship a control panel displays databases on the artefacts, on the inhabitants of the eight different time zones where they're kept, and on the renegade Lord.

On leaving the Falcon's Wing, which is immediately disguised. Falcon can rove and jetpack his way through 70 flick screens.

Programmed Cydroids shoot at our faithful agent, reducing his stamina - and when he's no strength left he returns to his craft. His stamina is restored by activating the ship's Auto-Doc system.

Falcon's weapon is a rapid response laser gun; he can also find Power Of Will tokens to protect himself and Thinkstrike discs which immobilise enemies. And there are useful items to be picked up.

But Falcon's time is limited; and he must complete three missions quickly to vanquish the Time Lord, though even Falcon can never kill this enemy...

'Falcon isn't much fun at first, but it grew on me little by little. Still, after a while I didn't want to play it any more. The graphics are average: some of the timezone backgrounds are attractive and the bas-relief works well, but the main character is poorly animated.'

'With features like time machines, time zones and a renegade Time Lord, this sounds like a good Dr Who story. But though some backdrops and the facilities aboard the Falcon's Wing are good, and whizzing through databases and time-zone choice lists on a head-up display are brilliant, the game doesn't grab me.'

'I wasn't impressed with the title screen - no nice graphics or tunes - and Falcon is tedious. True, as soon as the game begins you get into the action with baddies shooting at you; but there's nothing to catch the players attention. And once you've visited each time zone and seen all the graphics (reminiscent of poor games from a few years back) there's little of interest. I liked the Falcon's Wings databanks, but the information could well have been put in the inlay. A disappointing, very dated and poorly-presented game.'