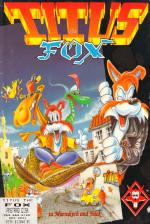 "How many roads must a fox walk down?" asked Bob Dylan.

So here we are, flicking through our Big Boys' Book of Amazing Facts, looking for 'Marrakech'. Pourquoi? Because the only fox we know (apart from Basil Brush who can't walk anywhere without a man's hand up his bottom) is a dude called Titus who must, according to a game box on the desk in front of us, make his way to Marrakech and back.

It turns out that Marrakech is in the middle of the Sahara desert, and Titus has to make this journey to rescue his fiancee Foxy, a photographic model who has been captured by a group of blokes on camels. The Sahara desert is approximately 2,000 miles from Titus' starting point (somewhere in France), so that makes a 4,000-mile round trip. Unfortunately, this doesn't really help us, as Bob wants to know the number of roads not the number of miles. So we guess we're going to have to load the game up and count them all...

Titus The Fox is a platform game of five levels, with each level consisting of a number of separate sections. There are street level baddie-avoiding bits, construction site scaffolding-leaping bits, and underground sewer-exploring bits (to name but three). There are a lot of hidden sections, and plenty of pick-up objects that do weird and wonderful things.

Various enemies lurk "enemylike" throughout the route. There are rottweilers, mad scientists, tramps, babies... all the usual sorts of people you'd expect to encounter when travelling from France to North Africa.

Some of the more exciting features of the 16-bit versions (including some different modes of transport and the facility to throw baddies) are absent from the Amstrad version. If that comes as a disappointment, there are two big factors to draw consolation from. Firstly, the CPC is the only 8-bit machine that Titus is available on (suck on that, Speccy and C64 owners). And secondly, the graphics are mind-blowingly brilliant and give the 16-bit equivalents a very long run for their money. A marathon in fact, and for a fraction of the price.

There are a few annoying little niggles, such as the frustrating flip screen death that occurs when you let two moving foes get either side of you. The size, general playability and stunning graphics more than make up for this. There's also a password system, which means you don't need to return to a previous level once you've got halfway through the current one (you'll find a phone box with a code in it). Nice one. After all, the first level of a platform adventure does get a bit boring when you encounter it for the 50th time. The down side, of course, is that this makes the game that much easier to finish.

As for the number of roads, what exactly qualifies as a road? There's plenty of window sills, scaffolding, roofs and sewers to journey along as well, and the action is as spread out vertically as it is horizontally.

Taking each separate street level section as a road, for the sake of argument, and multiplying the figure several times over (these are, after all, only the highlights of the 4,000 mile journey), we'd say about 250. "That's how many roads a fox must walk down, Bob."

"Hey man, wait a while, how many seals must one man eat before you can call him a slob? And how many times must the cuckoo clock chime before the meringues are done?"

"Look, what the heck are you on about? And what's that strange smell?"

"Hey man, mother's in the basement mixing up the omelets. What's through here?"

There are three different ways to deal with on-rushing baddies...

My only complaint is that the graphics slow down too much when there are loads of baddies on-screen. Apart from that, it's simply stunning.

Get to level three.

Staying Power 90%
You'll finish the game eventually, but you'll have got your money's worth.

This game has the best CPC graphics ever! Only problem is that they slow down too much when there are loads of baddies on-screen.