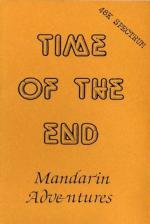 Time of The End | Overall Summary

It is the near future, not long after the troubles of '88 that scarred and shattered the cities.

Even the earth itself seems to be shaking itself to pieces - earthquakes, meteors, tidal waves and intense heat are battering the planet, whilst its inhabitants war amongst themselves, like quarrelling children in the ruins of their world.

Just another Monday morning, you may think, as you scan the scenario for Time of the End - a program from a one-man software company, Mandarin Software. Who is behind it all, what sinister forces are at work to destroy mankind? Is the Earth merely the plaything of demented alien powers who while away their boredom by tormenting the earth like a fly on a pin?

You betcha! And you are drawn by accident into the conspiracy. From unassuming city gent, still manfully going to work despite the fact the Bakerloo Line has packed up, you can become saviour of the world. To do this you'll have to go through Kafkaesque transformations and suffer numerous indignities and slights from the mad aliens.

"Huh' shrugs one as they prepare to torture you, "This one's a pathetic weakling even by their standards. Let's kill it." The game begins in riot-torn London in the late eighties. On your way to Waterloo along the Embankment you suddenly come across a glowing orb. They've got you now and, with a wrenching of atoms, you're transported to the alien base, deep in space. Once inside the glittering labs it's best to get quickly away from the creatures who seem to think you could benefit from a Charles Atlas course. Out of the frying pan into... the maze. When you've sorted it out you'll probably be feeling good like I was until the robot gets you and sends you back to Earth in the shape of a jackdaw. Devious, these aliens.

At this point you can ask for help - the droll response sums up the dry humour of the game: "You are a bird and limited in what you can do."

Time of the End is well-written and by no means simplistic. There is a nice attention to detail and descriptions are full and evocative.

A list of verbs is provided to avoid the old problem of finding the right action by going through your Thesaurus. The nouns you'll have to work out for yourself. There are numerous dead ends to get stuck in if you forget to think - at one point I found myself transported to the alien base but my body had disappeared, allowing me to do nothing except think. "OK" says the message, "You think so you exist but what are you thinking about?" It took me quite a while to get back my pathetically weak form.

The program is Quilled and text-only. Leith Milner, the boffin behind the game, firmly believes that graphics are only really useful for eating up memory that could better be used for more text. He's also included a solid type-face which is much better to look at than the normal Sinclair font.

Input is firm and beeped and there are a few sound effects to accompany transformations. This is a game that easily matches up to many commercially marketed adventures. The sci-fi setting is convincing, with a fair amount of action and a variety of different environments to get tied up in.

As it turns out, even Kilroy himself is an alien, this time a good one who's been trying to warn the Earth for years. Odd things like this give the game an individual, quirky feel and help to hook you in. It comes medium-priced with the promise of a sequel in July. If you fancy the sound of it send your cheques to Mandarin Adventures, 14 Langton Close, Woking GU21 3QJ.

One of an increasing number of independently produced Quilled programs. And it's a goody.

Time of The End | Overall Summary

One of an increasing number of independently produced Quilled programs. And it's a goody.