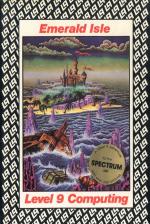 The Bermuda Triangle is a far call from the more prosaic charms of an English holiday resort. In Emerald Isle by Level 9 you find yourself hanging by your parachute cords after your plane has been destroyed by the strange forces at work in that part of the world.

Around you is the tropical forest of the island. Only one person may ever leave this place - the ruler of the land - and your aim is to amass the treasures needed to attain this pinnacle of social status. When you've collected them you must work out the correct method to become king.

The program is another graphic adventure in Level 9's new style and boasts 200 pictures with a similar number of locations. To be frank, many of the pictures add precious little to the game and I could quite happily have done without graphics showing the bare walls of a room or an expanse of sand.

Despite the graphic overload there are still the kind of descriptions and complexities which adventure veterans expect from the company. Even though Level 9 state specifically that Emerald Isle is an easier game than usual - and costs correspondingly less - the clue sheet still runs to over 500 items.

After extricating yourself from the parachute you make your way to the royal palace in Tree City. There you will begin to get some idea of the way the island operates and should find the railway which can transport you to other parts.

I was quickly befuddled by the vast amount of detail - this initial sense of bewilderment seems to be one of Level 9's hallmarks. There is never a simple progression from one easily solved puzzle to another. You never know whether an item you find will have one or many uses, and the wealth of information helps develop involvement and atmosphere.

The island setting is becoming a classic scenario for adventures but it is not often that you get quite so much for your money. As well as the mandatory volcano, natives, cannibals and coconuts to deal with, you will have to know what to do with carbide granules, ticket machines and lots more.

At £6.95 Emerald Isle is competitively priced and offers a style and sophistication hard to beat. If you're already a committed Level 9 fan you're unlikely to be disappointed, even if it is easier than usual. I'm still trying to read those damned foreign inscriptions.

If you're already a committed Level 9 fan you're unlikely to be disappointed, even if it is easier than usual. I'm still trying to read those damned foreign inscriptions.