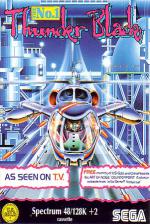 Everyone who's been to an arcade in the last 12 months, or indeed anyone who went near the US Gold stand at the PC show this year will know that Thunderblade has you as the pilot of a lone helicopter, battling against endless hordes of enemy tanks and airborne defences with only one thing in mind - the destruction of a rebel force that's slowly over your country.

The coin-op itself was an impressive sight. The fast, colourful realistic graphics were a sight to behold, and the pumping soundtrack more than enough to drive you over the edge. The cabinet wasn't quite so impressive. Sega steered away from the hydraulic impressiveness of the full Afterburner cabinet, and opted for a manual leverage control system. That means you have to move the seat around yourself with the control stick, which is quite a weighty process, rendering the sit-down version a little unplayable. None of that with the stand up against the wall version.

Thunderblade on the Spectrum is an impressive feat. So what if it's monochrome, it's fast, it's a very close copy of the coin-op, and it's GREAT! The only real problem with the graphics is that in some cases it can be just a little too hard to tell which are the enemy bullets and which are yours. This does make the game a little difficult, but I love a challenge.

The game control changes through three distinct, wonderful and different types. The first is implemented on the first screen of each level, and is a top down view of the surrounding area in a full 3D environment, in which you are free to move around.

The second screen also contains a full 3D environment, but this time you are viewed from behind and are flying forward through a startlingly real landscape of buildings and skyscrapers. Later, you fly through levels of canyons and a river section. The third and final level on each section is the fight against the big bad mutha.

Each of the four muthas is about four screens long and is viewed in much the same way as the first section, except you can't move in or out of the screen. Hundreds of gun emplacements line these huge monsters of war, and have to be shot out. This is very hard to start with and gets progressively harder as you go along.

It's nice to see the same attention to detail in Thunderblade that is making Op Wolf and Afterburner sure fire hits in the conversion stakes. Thunderblade utilises the same 3D graphic environment generator as the coin-op which more than helps the feel along. Rather than trying to create solid buildings, for example, they have captured the 3D look by creating each image in planes, each plane holding it's position on screen via the laws of vanishing-point perspective. This means you get a very real look to the buildings, and it's a lot easier to manipulate large 3D objects than messing about with filled vectors.

Thunderblade is brilliant, and in all honestly, seems to be a real step forward for Speccy gaming. It's fast, smooth, quite playable and a darn fine conversion. It's not often I say this, but it seems that finally a US Gold game has lived up to it's hype.

Fabbo conversion of a good coin-op. It falls a little on playability.

Fabbo conversion of a good coin-op. It fails a little on playability.