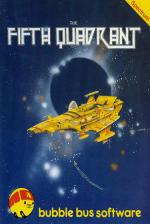 Who'd be a person called Bodd? I'll tell you who. One of the 4 heroes in the old Bubble Bus title, 5th Quadrant. You play the 4 robots who have been given the task of re-programming a few computers on a spaceship that has been taken over by a lot of nasties who in turn have re-re-programmed the same items.

Confusing? Not half as confusing as the gameplay. Your sprite looks like a pepper pot with no face, so you can't tell which way he's pointing. Also, you don't seem to be able to fire straight at the very-fast-to-appear-but-very-slow-to-die nasties that come at you with a glitch and a smile. The graphics are plain, sound even plainer and altogether, not my choice for the prestigious cheapo of the month, award.

Tedious 3D arcade adventure with little or no playability.

Tedious 3D arcade adventure with little or no playability.