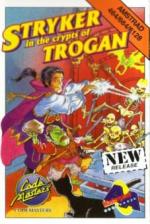 Stryker And The Crypts Of Trogan

Trogan is not a nice bloke. In fact, he's a "vile monstrosity". In other words, not the sort of bloke you'd want to go out for a drink with. His nickname is "The Diabolical" and he's got a whole bunch of evil minions (skeletons, skulls, monks, rock people, etc) all helping him to spread his malevolence across the land. Brrrr.

Stryker, on the other hand, is a nice bloke. He's a brave warlock dude, and he's opted to venture into Trogan's crypts to vanquish said nasty evil bloke for good. Of course, he's going to have to get physical with lots of the evil minions before he gets to face off with Troggie himself.

Our first reaction when loading Stryker up was to declare flamboyantly, "It's Switchblade! The similarities are there for all to see, though it could easily be argued that detailed, smallish graphics of this type is simply the programming team's normal style of doing things. The platform exploration gameplay is frighteningly similar to Switchblade though, with the industrial/warehouse setting replaced by a fantasy/horror one.

There's not much point explaining the gameplay here. You'll find all that info on the tape pages, and you can try it out for yourself with our exclusive covertape demo. Here we just focus on the game as an entity (what-ever that means).

There are five levels (the whole of level one is on the cover tape) and sixteen parchments of truth, which Stryker has to collect on his way, for some reason or other. Power ups are everywhere, mainly hidden in big jugs (oo-er!).

These include rockets, fire bolts, proton sticks, fire-crackers, laser nails, and a couple of megakill unlimited range things (the razor disk and 'the lost spell'). There are also lots of bonuses around, which drop from the sky or (like the power ups) lurk inside jugs. Orbs and spheres are worth points, and gems are worth points and increased power on the combat power meter at the bottom of the screen. There are six meters at the bottom of the screen, each indicating the state of a different aspect of Stryker's powers and abilities (e.g. magic, combat).

Stryker is an excellent game which owes a lot of the ideas behind it to the fantasy role playing genre. The graphics are spectacular, even on the old CPC machines. On the Plus of course, the graphics are simply breathtaking; there's incredibly smooth scrolling and a wonderful graduated background. The game area is so large that it will keep you going for ages.

A classic platform game in the Switchblade style, and absolutely unmissable (for Plus owners especially)

Stryker And The Crypts Of Trogan

A classic platform game in the Switchblade style, and absolutely unmissable (for Plus owners especially). Breathtaking graphics.