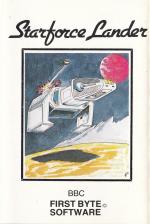 When the BBC micro first burst on the world some three years ago now, I remember being enthralled by one of the new lunar lander programs my local software house was marketing. But that was three yeats ago and things have changed vastly, which means that far from being thrilled by this program it is rather old hat to say the least.

Admittedly, there are six different types of landing difficulty and it uses a more interesting manouverable space craft which actually turns itself round but it simply isn't enough to make the game interesting any more. The screens are fairly well laid out and the graphics acceptable.

Unfortunately, the author decided to go for high resolution plotting and therefore uses a low number of colours which, while being accurate, means that in the current market the program is that much less attractive. It is difficult to play, however, and should provide a few hours enjoyment for those who like a challenge. The different levels involve asteroids, alien space craft firing upon you and difficult city landing pads to give variety. Key control is good and accurate but a joystick option would have been nice. Overall, a fair but unexciting game. The lack of any documentation is lamentable.

Other BBC Model B Game Reviews By D.C.

A fair but unexciting game... Lack of any documentation is lamentable.