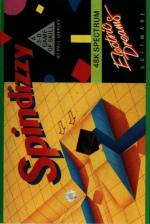 If you like games that simultaneously tax your intellect and exercise your joystick hand, then you're going to love Spindizzy, the latest from Electric Dreams.

You, as Trainee Assistant Cartographer for Unknown Worlds, have to boldly go where to TACUW(!) has gone before, and use your remotely controlled scout craft (or Geographic Environmental Reconnaisance Land-mapping Device - GERALD for short) to explore a weird and wonderful landscape, full of fiendishly clever puzzles.

Gerald can take two forms - either a gyroscope or a ball. Whether there's any advantage to being one or the other I have yet to discover.

Anyway, your mission is to guide Gerald round an immense obstacle course, avoiding various hazards (of which more later) and collecting gems. Don't be fooled by the first screen, or by the 'beginners section' which lies to the east of it: most of the rest of the screens are guaranteed to give you brain-ache.

Each screen is eight squares square, like a chessboard, if you see what I mean, and in the early screens - the start screen and the beginners section - all of these squares are solid ground, which means that you can dash about all over. On later screens, though, you have to be very careful as the path can narrow to only one square wide, with voids of space waiting to either side.

Nor is the play area confined to only one plane; on some screens you can trundle along on two or three different levels.

Getting from ground level to the first floor is often achieved by going up a slope. Sometimes you have to use one of the many lifts which are dotted around - but to get the lift to work you have first to activate it by moving over a panel on the floor.

These floor panels, of which there are many different types, can also cause other things to happen: on one screen, there are two, and you have to touch both, in the right order, in order to create a path between two pillars. You do get hints, though, which will give you an indication of what type of panel will solve a problem.

Of course, like all the best games, nothing is ever as simple as it seems. There's a time limit - and not a very long one at that. As you fumble through screen after screen, the clock is ticking away. You do get extra time added on for each jewel collected and for each new screen you enter, though. Unfortunately, you also lose it every time you make Gerald do something stupid - like falling off the edge of the world.

The problems range from the simple - how to get enough momentum to get up a slope to reach a jewel at the top, without going so fast that you fly off the other side into the voids of space - through the merely difficult - how to get through a maze of passages to collect another jewel - to the downright impossible - how to get from one side of the screen to the other when there's no apparent connection.

To help you, you have a map which shows the way the screens are laid out and where the uncollected jewels are. Unfortunately, mine doesn't seem to.

You can also change your viewpoint, which is especially useful as on some screens Gerald has a habit of disappearing behind obstacles if you're looking from one direction.

When I first started I found myself flying off the edge an awful lot. Don't be too discouraged, you can learn a great deal about what's on the next door screen. The map only tells you whether there is an area which you might be able to enter next door. If you manage to leap off the side of one screen, you get shown the adjacent screen for a couple of seconds before falling to your doom. This means that you can map it properly and begin to work out exactly how the screens interconnect.

One thing worth remembering is that your fire button speeds you up and the freeze button - the F key - stops you. When I started playing the game I didn't know that, which made everything a lot more difficult! Using a joystick it's sometimes a bit difficult to reach the F key in time, but even so it's easier than using the keyboard throughout.

To add further confusion there are also some aliens knocking about: all you have to do is avoid them. If they hit you, you begin losing energy.

It's easy to look at Spindizzy and say it's another Marble Madness type game, following on from Gyroscope and Quazatron.

But with a fair crop of new twists it is easily one of the best Spectrum games I've played recently.

And for Electric Dreams it's a major improvement on Back to the Future.

Arguably the most enjoyable of the Marble Madness derivatives so far. Electric Dreams' best yet.

Arguably the most enjoyable of the Marble Madness derivatives so far. Electric Dreams' best yet.