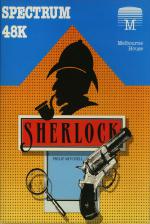 THE GREAT Holmes would no doubt have been appalled by the sensationalism accorded to his powers by the new Melbourne House game, but the company has produced an adventure in Sherlock to rival The Hobbit in terms of atmosphere and sophistication. The most striking feature is the way in which the characterisation has been developed. Hobbit fans will recall how characters had a habit of wandering off in all directions or sitting on the ground and singing about gold.

In Sherlock you can not only talk to other characters, of whom there are at least thirteen, and ask them to do things for you, but you can also interrogate them and even discuss the case. For example, saying to Watson "Tell me about the gun" may or may not elicit information, whereas a sentence such as "Watson killed the Major" will, even if addressed to nobody in particular, register with other characters in the same location who may alter their actions accordingly.

That, coupled with the Melbourne House use of Inglish whereby the player's input is not limited to nouns and verbs but includes natural sentences such as "Quickly open the front door, go through the door and immediately hail a cab", ensures a high degree of realism. It is unnerving to have other characters, notably Inspector Lestrade of Scotland Yard, asking you questions such as "Well Holmes, have you any evidence to prove Watson killed Major Ffoulkes yet?" based on what you said earlier in the game.

The game itself opens in Holmes' study in Baker Street, with Watson seated in an armchair with the daily newspaper. It is up to you to discover what the case is about, and throughout the game, as in The Hobbit, you will need to use other characters to help you. Without wishing to give anything away, we can warn you the crime is fiendish, and the plot very complicated. We twice thought we had solved the crime after many hours playing, only to discover a new piece of evidence which blew each theory to pieces.

There are few of the logic problems whereby you need a specific object to continue to new locations, but plenty of evidence is lying about to be pieced together. As in the original stories, Holmes not only has to worry about solving the crime, but also saving the innocent, as the bumbling and self-satisfied Lestrade - beautifully portrayed - rapidly makes up his own mind as to who is guilty.

Thus the game is also a race against time, and a clock is provided on screen showing the time of day to the nearest minute. That is of the utmost importance not only as a guide to how well you are doing but also for catching trains on time. Since there is no train timetable provided, you will have to find out the schedule for yourself. Do not be surprised if your first few attempts are spent wandering around Victorian London; you will have to use the Underground system and hansom cabs very efficiently in order to be at the right place at the right time.

The graphics are not up to Hobbit standard. They occupy only a small section of the screen - about a quarter - but given that limitation are pleasing to the eye.

We also discovered the odd bug in the program. At one point a previously impeccably polite cabbie said "You bloody snob. Don't ever try to get into my cab again", whereupon the program printed out a long list of locations, and promptly crashed. On the other hand, probably deliberately, when night fell and we suggested to Watson that he go to sleep, the faithful old coot replied: "Brilliant, Holmes". He even tried to climb into Holmes' armchair when Holmes was sitting in it. Conan Doyle would have turned in his grave.

Melbourne house say in the instructions that the game cannot be guaranteed bug-free, because of the enormous number of possible events involved with character interaction. That did not seem to put people off The Hobbit, and the discovery of new Hobbitbugs became a minor growth industry in its own right. Since we can probably expect similar cries of delight from the hackers over Sherlock, perhaps Melbourne House should be given the benefit of the doubt.

Familiarity with the Sherlock Holmes stories will help you play the game, although not as directly as a knowledge of Tolkien helps solve The Hobbit. In particular, you should remember that Holmes never unravelled a case by deduction alone, but had great powers of observation. You cannot solve the mystery without the aid of the police, but you will need to strike out on your own account to improve on their performance. The police are also capable of obliterating the evidence, so make sure you see what you need to see early on. Then you can start checking the various suspects' alibis and begin to draw conclusions.

Although there it no book with the game as in the case of The Hobbit, the instruction booklet contains a few clues in the form of examples to help you start. At £14.95 Sherlock cannot be considered cheap, but on the other hand it did take 18 months to develop, and has finally been released six months later than expected. The wait has been worthwhile.

Finally been released six months later than expected. The wait has been worthwhile.