1st September 1984
Jack And The Beanstalk
By Thor
•
Spectrum 48K 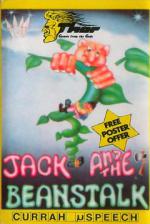 Jack and The Beanstalk

ONCE UPON a time Jack was going to market to sell the family cow. But on the way he met a sales rep from Thor who offered him a copy of Jack and the Beanstalk in exchange for the animal.

Jack's mother was hopping mad when she found out what Jack had done and sent him to bed with no dinner. So Jack loaded the game and began to play.

He was very impressed by the graphics on the first screen, which showed a giant beanstalk climbing into the clouds. Avoiding the spider and the birds, he collected his magic axe and began to climb. After falling off about forty times he got the hang of it and soon found himself at the foot of the giant's castle. Unfortunately there seemed to be no way of progressing further; some of the blocks could be climbed but as far as getting up the whole wall went, Jack could find no way of doing it.

While playing the game Jack noticed that the colours were not very well organised, as they spilled over onto other parts of the picture, and the moving objects flickered, causing his eyes to ache. When his mother came in the next morning she found Jack huddled under the bed, completely blind and muttering to himself.

Moral: just because a game has pretty pictures doesn't mean it's worth more than a bag of old beans.

Jack and The Beanstalk

Just because a game has pretty pictures doesn't mean it's worth more than a bag of old beans.