Published in Your Sinclair #36 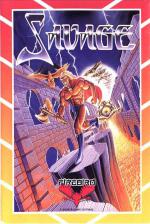 I'm afraid this intro is really more of an appeal than a 'clever' 'link' into the review: so if appeals bore you then skip to the next paragraph, if not then read on chum. In Roger's Thesaurus (yes yes, I know it's Roget's, but this particular copy belongs to a friend of mine called Roger) I was looking under 'savage' when the alternative word 'wild' caught my eye, causing a question I've been mulling over for some years now to come flooding back into my consciousness. Whatever happened to Jack Wild? Remember Jack Wild? You're lucky if you don't - for reasons too numerous to go into - but he was in a series called H.R. Pufnstuf, and then he mysteriously disappeared off the face of the planet. Where is he now? Someone must know! Anyroad, back to the game.

Savage's a game of three separately loaded parts linked together by a main theme: playing Savage, you have to escape from a dungeon by killing everything that moves, then when you've escaped realise that you've got to steam back in again 'cos you've gorn and left your 'chick' behind. Silly sausage.

Let's have a butchers at the respective loads, shall we?

Load one Blurb. "Fired by rage, Savage plunges into an orgy of violence, dispatching all who stand in his way. Ahead of him awaits a labyrinth of dank and gloomy dungeons concealing a myriad demons and ghouls." The facts. You control a large, brilliantly animated and brightly-coloured axe-wielding warrior sprite in a nicely detailed left/right right/left scrolling dungeon environment. Coming at you thick and fast are countless varied nasties (also brightly coloured), some of which are easy to kill and, and others which aren't. Some of these nasties, when killed, release a sort of jewelled box onto the ground. These can be picked up by crouching on them, and either add to your treasure-count of bestow you with extra killing power. If you survive for any length of time (and you've only three lives) you'll reach the meganasty. Dispatch him and it's down the hole into another level of the cavern, and so on until, if you manage to escape, you'll be given an access code for load two.

Load two. Blurb. "Savage has escaped from the castle and will have to fight the defenders of Death Valley whose aim is to stop all who seek to escape from the area." The facts. The view changes from side-on to 3D 'viewed through your own eyes'. Thousands of large green monoliths come flying towards you as you speed across the ground, starting as specks on the horizon and rapidly growing into impassable blocks with scarey faces as you near. These, quite simply, have to be avoided, while appearaing from out of nowhere and keeping a set distance from you are faces of ghosts and skulls. These have to be shot. For comparison purposes here you should visualise the 'approaching tower sequence' from either Space Harrier or Glass - i.e. it's all very slick and fast, but in this one there's loads of colour. Avoiding the monoliths at the same time as shooting the nasties is a tricky business indeed, but should you clear the round without losing your (again) three lives, you'll get an access code for load three.

Load three Blurb. "Halfway through the attacks, Savage discovers his 'escape' from the castle was a trick to keep his maiden love (i.e his 'chick') imprisoned foreover, so he returns to the castle and calls upon his trusty eagle to fly into the labyrinth to rescue her for him!" The facts. Back to the side on, left/right, right/left, up/down scrolling format. This time, however, you're in control of the eagle as you negotiate the crowded colourful caverns, killing (with laser bolts) the assorted enemy (bats, other birds, gargoyles, hopping mega-nasty), and avoiding the obstacles (falling weights, spiked platforms and much more). Colour, again is used in abundance - to good affect - the sprites are all chunky, and the animation on the eagle is absolutely splendid.

Savage, as a whole, is an absolute corker of a romp. Each of the three parts is equally playable and equally varied. As I've said about nine times already, colour is used to brilliant effect inducing the kind of attribute-clash that doesn't really matter too much - i.e. there's a bit of it, but the action is so fast you never get to point at the screen and say "Oh look, there's a character square". In fact, I'd go as far as to say that I'm surprised the Speccy can handle the amount of colour used so successfully - especially on the first level. The sounds okay too, as is the control response, difficulty, addictiveness and all the other things that go to make a game perch that little but higher than all the rest and achieve megagame status. Oh, and by the way, you can see levels two and three without the access-codes from levels one and two - but you only get one life, so if you want to stand a chance of completing Savage... get those codes.

A highly colourful 'three games in one' package in which each of the sub games would merit a release on their own.

A highly colourful 'three games in one' package in which each of the sub games would merit a release on their own.