Published in Your Sinclair #34 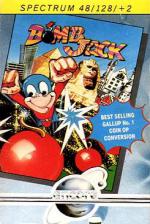 If you haven't got this already then you're in for a birrova treat. It's a coin-op conversion (and it shows) of a platform/collect objects/avoid contact with the nasties game.

You control a small mouse who's wearing a sot of Superman costume. The first screen pops up revealing several small platforms and numerous circular bombs. The idea is to leap around the screen collecting these bombs (by contact) as you go. One of the on-screen bombs is always alight (its fuse sort of glows), and is worth more points than the others. You don't have to get it first, but if you do then another bomb lights up. And so on.

Things aren't as easy as that, though, cos there are numerous nasties who's sole aim is to help you pop your clogs. Any contact is fatal. They often get in the way of the key bombs you need in order to clear the screen, and while you're waiting for them to get out of the way you'll find yourself becoming surrounded by others. Yikes! Leap about a bit.

Fortunately a saviour is at hand in the shape of icons that float down out of the sky every so often. There are several types, but the most useful has got to be the one that puts your adversaries to sleep (for a limited time) enabling you to get at the more inaccessible bombs.

Clear a screen and it's onto the next. Newly positioned platforms and bombs all set on a brilliant backdrop. Oh, I forgot to tell you about the backdrops. They're, eerrrmm, brilliant.

The speed at which the game plays is brillo too, as is the animation. This really is a game that'll have you coming back for more (and more and more and more). Classic stuff.