﻿ Beyond The Ice Palace (Elite) Review | Your Sinclair - Everygamegoing

Published in Your Sinclair #31 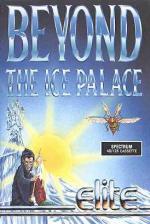 Beyond The Ice Palace

Beyond The Ice Palace lies a mystical land where strange creatures dwell. 'Tis is a land of fantasy, of magic, of goblins and ghosts, of good, evil and long forgotten tiny pieces of blue-tac.

That's the basic inlay blurb (erm, except the bit about the blue-tac), and it seems that idea is to journey into these lands and restore the balance by ridding them of evil. Crikey. Yes, I know the storyline is a bit staid, but luckily the game isn't. It's a corker by cracky.

What we have, to put it in a pigeon-hole, is a platforms and ladders game. A big one, with large sprites and four way scrolling. You (a wing-helmeted Viking type), begin on top of a large cavern next to a vertical tunnel shaft. At your feet are three weapons; two different knives and a sort of 'mini second-world war sea mine with spikes on.' They all work in different ways, but you can take one, so decide on which, pick it up (by standing on it), and jump down the shaft. The quest has begun and there's no going back - unless you press the break key.

Running through the cavern you'll encounter and have to kill Ogres (easy), flying bats (annoying) and, occasionally, giant moth-things (very tricky). The cavern soon opens up into trusty ladders and platforms format in which you'll still be plagued by the bats and also (oh no), more of the giant moth things. There are, as you might have guessed, things to collect - orbs (which give you points), different weapons, and (very occasionally) little head-shaped icons. These are 'the spirits of the woods,' and jolly useful they can be too!! If things are getting decidely squiffy, just press a pre-defined key and ber-zoing, down the screen drifts a spirit, killing or injuring any 'nasties' it touches before disappearing at bottom.

Anyway, next you move on to a gigantic verticly scrolling elevator shaft. getting to the top of this is no mean feat, but there's worse to come - the mega-nasty, a SpaceHarrier-ish dragon snaking around in a most unpleasant and deadly fashion. "Quick, release a spirit. Oh no, I've used them all, and I've only got one life left. Aaaaarrgghh!!" You can have triffic fights with the dragon, as the lift shaft part of the program hasn't been 'switched off.' "Run away, jump, down, down, down, up, leap, down, down, yaaaargh it's following, dodge, dodge, leap, up, fire fire fire, bleeeaarrgh - dead again!"

If you do ever manage to kill the dragon, a ladder descends from level two. More platforms, more ladders and more deadly and different nasties. Cripes.

Now, one of my pet hates is games lacking in substance being 'boosted' by making progress so hard that you find yourself continually re-starting only to be killed again in roughly the same place. Beyond The Ice Palace doesn't lack substance, but I did find the difficulty level pitched too high. There's a sort of progress - the further you get, the harder it is to improve. Even with ten lives, I never got much further than the middle of level two. Addictive frustration eventually gave way to annoyed frustration. That's my only complaint - I enjoyed the game tremendously while I was actually improving my scores. Still, maybe I'm just inept. We'll have to wait and see.

Time for a quick glossary.

The graphics are big, bold and quite nicely animated. There's a fair amount of colour with hardly any attribute clash. Oh, and the scrolling's fine. On the sound front, things are good on the 48K and great on 128K (super sound-effects and two tunes by David 'Amaurote' Whittaker). The playability's great except for the excess difficulty probs i mentioned, and there's a good front end with continually accessible joystick/keyboard options for those with dodgy interfaces (oo-er) and fickle keyboard tastes.

All in all, a rather super little game. Oh, for a POKE (double oo-er).

Beyond The Ice Palace

A rather super chunky scrolling platforms and ladders game. Great fun to play, but becomes 'blinkin' difficult too soon.