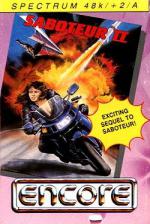 This is one of Durell's better products. The follow-up to the hugely popular Sab 1, it was raved over by young Mr Snout ("you're all doing very well") way back in 1987, and if it doesn't perhaps hold up too well now, it's still an entertaining enough chase-and-kick-'em-up with the novelty of a female hero (a good way of getting around Tzer, at least).

Mapping is essential, unless you happen to have the September 1987 ish of YS to hand, in which case look on the centre pages. (What? You don't have one? Buy a back ish immediately!) The scenario involves you (that's Nina, who's a ninja too) hand-gliding into the enemy control centre to avenge the death of your bro' - that's Sab - who got iced at the end of the previous game. You must get in, destroy as much as possible, prevent the evil toads from nuking the western world, and get out on the flashy motorcycle you'll find in the lower caverns of the mountain. Oodles of screens, loads to do, it's all pretty hard, but at £1.99, splendid value for money. A Megagame when it came out, it's not quite in the same league these days, but for anyone who likes their games big and hard (oo-er), it's a corker.

Splendid value for money. For anyone who likes their games big and hard, it's a corker.