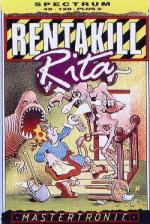 While the graphics are OK, especially the flying eyeballs and sinister wasps, we've all seen this kind of 'pick up the block, drop it on another block' thing too many times before. Along side the invention of Jon Ritman's Head over Heels, Rentakill Rita doesn't shape up at all well.

Another undistinguished attempt to produce an Ultimate-style arcade adventure on the cheap.

Another undistinguished attempt to produce an Ultimate-style arcade adventure on the cheap.