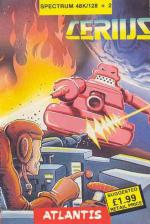 Erk alors! Donner und Blitzen! Hoots mon! Imagine my surprise to see that a game as good as Cerius was a) only £1.99, and b) from Atlantis, who are, how can I put it, not normally noted for the thrillingness of their games.

Cerius owes a good deal to the recent spate of horizontally-trudging-man-in-a-spacesuit games, like Exolon, Yeti and Northstar. It manages to cram in decent background graphics, sophisticated gameplay and reasonable sound, and still leave enough change out of £2 for a penny chew.

The game takes place on a series of multi-level screens which are split up by impassable obstacles. You find your way through this maze using the available transporters, which will always move you to another, specific, location.

As you move around you have to deal with enemy ships, either blasting them with your tank gun or by using one of your precious smart bombs. Energy and ammunition can be replenished by finding specially-marked podules.

On each level your aim is to find and eliminate four robot carriers, each of which yields a code letter. At the end of the level you are prompted to rearrange the letters to form a word, and this lets you on to the next level.

Level two is even better than level one, I thought, with finely-designed backgrounds which are so well thought out that there isn't a hint of colour clash - full-price games programmers please note.

At certain stages you'll find yourself unable to proceed any further, because the platforms are laid out in such a way that you can't shoot one of the code carriers. To solve the problem you have to find an ARMOUR podule, and grab hold of a sort of extension thingy which sits on your shoulders, and enables you to pop off the offending robots. It also doubles your firepower.

So who are these chappies who have created such a spiffy game? And when are we going to get some more from them? Personally I can't wait; Cerius is one of the best budget titles I've seen, and if it were completely original it would deserve a great big floppy kiss.

One of the best budget titles I've seen, and if it were completely original it would deserve a great big floppy kiss.