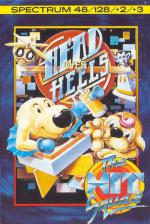 Aargh! Cutesy games! I hates em! Still, you have to admit that Head Over Heels is, ha-ha, head and shoulders above horridnesses like Blobsy Goes to Weebletown, so it's good to see it re-released at a budget price. This is the acceptable face of cuteness, an isometric perspective multi-room masterpiece by John Ritman and Bernie Drummond, and it's interesting to note that there hasn't really been anything better since.

The graphics are monochrome, but excellently derailed, and as with all these isometric thingies, the challenge is to work out how to solve the puzzle in each room, then actually solve it using pixel-perfect joystick skills.

Ici, c'est la plot. Our two disadvantaged heroes, head, who doesn't have any legs, and heels, who hasn't much up top, have been captured and imprisoned in the castle of the evil Blacktooth. Your job is to get them out of prison, help them to meet up, then escape the castle and visit several slave planets in search of stolen treasure. Wooh, exciting!

The various chambers are filled with a weird assortment of animal life including the Reincarnation Fish, eating of which can restore you to that position if you die; the Cuddly White Stuffed Bunnies, which give you extra lives, protective shields, high jumps and go-fasters; Hooters, which can be used to fire doughnuts at attacking monsters (can you believe this?); Hush Puppies, which teleport themselves away without warning; and Guardians, which are no fun at all. To overcome this lot there are carrying bags, teleports, springs, switches, conveyor belts and all the usual paraphernalia to learn to use.

The user-definable swap key switches control from Head to Heels or vice-versa; an icon lights up to show which you control. You soon learn that there are some tricks you can only do if the two are joined together, Head sitting on Heels' shoulders, such as jumping upwards into a chamber above you.

Great graphics, fiendish puzzles and original gameplay more than make up for the cuteness overload of Head Over Heels, so if you want a change from Blast-The-Mutants, check it out.