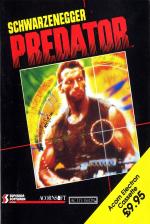 Predator is a Commando-style game where one man armed with just a gun and some grenades has the awesome task of defeating the enemy. The idea of the game is to seek out and kill an invisible creature which lingers with you whilst playing the game. There are four levels of play and, once these are completed, you have to face this beast and try to destroy it using your three lives.

Once loaded, you are greeted with a scrolling background showing the general characteristics of the game. Press Space and you begin. You are placed roughly in the centre of a path, surrounded by strange-looking plants which are supposed to represent the jungle! You move around using the familiar ZX*? and Return keys and, by using differing combinations, you can either fire your gun in different directions or use hand-to-hand combat to conquer the enemy. Ducking comes in handy and it is possible to avoid the enemy's bullets. It is also possible to fire diagonally which is a great help in shooting the roaming guards without being shot yourself. Grenades are short in supply and I found that by the time you had fired one, the enemy had moved on anyway so the grenade was wasted.

The Schwarzenegger sprite is quite well defined and reacts pretty well. I rather liked the way his shadows were defined and how he held the gun in just one hand. The action follows the Predator film quite closely. At different points during the game, the screen went to an inverse screen. This worried me at first but, on reading the instructions more closely, I found that this is the point where the screen is showing the picture seen through the creature's eyes and a target chases you. If you are caught in this target at the wrong moment then I'm afraid you've had it!

The instructions do not mention that birds, of the feathered kind, fly across your head at various stages of the game and can cause serious damage especially when you lose a life. Then you are placed at the beginning of that screen and so have to face the birds again.

The soldiers on foot are well defined and their walking movements very lifelike but they are not the only enemy. Other soldiers, who stick their heads out from the ground like worms, are sometimes annoying but can be jumped over or shot.

Sound is minimal but is acceptable. The only real minus points I have about the game is that, when one level is completed and you lose all your lives in another, you have to start right back from the beginning. Also I think some more lives wouldn't have gone amiss.

Personally, I don't think Predator is particularly astounding but I found it to be better than other arcade-style combat games. If you like these action games then you should like Predator.

Not particularly astounding but I found it to be better than other arcade-style combat games. Some more lives wouldn't have gone amiss though.