Published in Your Sinclair #29 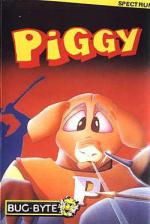 Once upon a time there were three little pigs. They each built a house of differing structural solidity in the hope of keeping out the big, bad wolf. Pig number one goofed up a bit with his house made of straw (the clot), as did pig number two with his little wooden shack. Oh dear, oh dear, will pig number three get it right? I do hope not!!

You get to play (yes you guessed), Piggy number three in this flick screen maze cheapy. Guide the little chap around, avoiding the nasties, while you pick up the items he needs to build his house. Hot on your tail is Mr Wolf himself (for it is he). And that's it basically.

With its rudimentary UDG graphics, almost non existent sound, appallingly bad control response, uninteresting gameplay and rather 'iffy' collision detection. I am forced to the conclusion that this game is eeerm, not really very good at all. In fact it's worse that that Even at £1.99 I guarantee that if you buy this you WON'T live happily forever after. Boing.

A waste of dosh even at budget price. You'll be huffing and puffing for your money back!!

It's not very good at all. A waste of dosh even at budget price. You'll be huffing and puffing for your money back!