Published in The Micro User 4.02 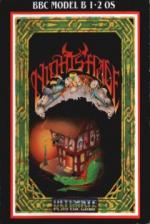 Menace of the 3D plague

Hot on the heels of their smash hit Knight Lore, Ultimate releases Nightshade, yet another 3D arcade adventure game.

The program derives its name from the village of Nightshade in which the adventure is set.

Many years ago Nightshade was a tranquil little haven lying in the valley between the purple mountains and the sea. All was well until the day darkness descended on the land.

Many villagers fled for the hills, those who remained were transformed into hideously foul creatures.

Since the plague no person has entered the village, let alone dared to challenge the evil overlord.

Once again it looks as though you are on your own against the evil hordes. Just to make things that little bit more difficult you are not told where the overlord is, or how to defeat him.

No one could expect you to enter the village unarmed so you have been provided with a pocket full of antibodies. These will soon be exhausted if you fire at every reptile or blob of slime which crosses your path, so use them wisely.

You are free to wander through the streets and enter any of the buildings, but the many characters you will encounter will deplete your energy by a certain amount if you collide with them.

A useful tip is to collect the things which look like spinning candles. These can be used as ammunition against the enemy.

Owners of the previous Ultimate titles will be familiar with the 3D techniques used in their games.

The characters move around each other in such a way that you can sense the depth of the display.

Other BBC Model B Game Reviews By James Riddell