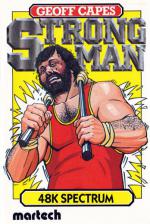 Unlike some sports simulations Geoff Capes Strongman requires more than mere joystick waggling. The game begins with a training session, the outcome of which governs your performance for the six events. The task for this session is to build Geoff's strength up as much as you can. At the bottom of the screen you see an empty bar graph. You have to waggle the joystick like crazy for a few seconds to get the red bar as far up the scale as possible. You can wimp out, and accept the default strength, but it's not that macho.

Every event begins with a rest period, when you share out the strength you have built up. The energy shown on the main bar graph can be allocated to the eight body parts represented by icons around the edge of the screen. Moving the arrow over an icon, you hold down fire until the desired amount of energy has been transferred onto the smaller bar graph contained within the icon. Repeat this Process until all parts of the body are awarded some strength.

During an event, the rate at which a muscle's energy reserve is depleted depends on the level of effort you selected at the start and how often that particular part of the body is used during the task. Care has to be taken in allocating strength reserves, for if any part of the body is called upon during an event and found to have no strength, then Geoff collapses exhausted and you have to begin the game afresh.

During an event, the action is viewed on the central area of the screen, around which eight icons are grouped. The most novel feature of this game is the way in which joystick waggling has been replaced with icon chasing', making it much more than a 'how much punishment can you give your joystick ' game. The Z and X keys are used at the start of each event to move a horizontal bar up and down on a scale from 0 to 100, indicating the effort Geoff is to put into the task in hand. The more effort Geoff puts into an event, the more rapidly he can complete it, and the more difficult it is for you!

During the Lorry Pull, Barrel Loading and Car Roll events, the eight muscle icons around the screen flash, indicating the order in which the muscles are called upon as Geoff gets going. You must follow the order of the flashing icons by moving a yellow arrow over each icon in the sequence and pressing fire.

If you manage to follow the order, then the icon you selected flashes green. If you select an icon out of sequence then it flashes red. If you fall too far behind the sequence, Geoff grinds to a halt - and if you mess up totally, you can wait until all the icons flash red, indicating that the sequence is about to start again. The speed at which the icons flash yellow depends on the amount of effort you have selected - at 100 percent you daren't blink. You are competing against the clock in all three events.

The Log Chop requires you to press the fire button with split second timing. An Axe moves to and fro across the screen, above a log. When fire is pressed it descends and chops a lump out of the wood. Sections of softwood take one chop to cut through, hardwood needs two chops and knots, toughest of all, three chops. The aim is to select an easy section of log to attack, so you can cut through within the time limit.

Barrel Loading uses both joystick waggling and icon chase. Geoff must load five barrels onto a truck within the time allowed. Waggling the joystick moves him over to the barrel and makes him pick it up. From here on, chase the icons until he reaches the truck, then press fire at the right moment and Geoff lobs the barrel into the truck. Then it's back across the screen to collect the next barrel...

The Fairground Bell relies on a sustained period of waggling, until all of the muscle icons flash red indicating that Geoff is ready. Hitting the fire button brings the hammer down with a vengeance. The quicker you are at hitting fire after the muscles have flashed red, the better Geoff does.

Sumo Wrestling is the last event, and the only event where Geoff is forced to take on another competitor, face to face. The winner is the person who pushes his opponent out of the ring within the qualifying time. Pressing the fire button at the right moment gains ground for Geoff: bad timing loses ground.

Although Geoff is awarded a score for the completion of each event, the aim is to complete all six. If he fails in any event, either because he was exhausted or because he failed to qualify, then a new game starts. Should Geoff emerge from the events victorious you can have another training session and begin again, but this time the events are harder to complete than the time before. If you want to keep measure of your muscle power, then remember to enter your name on the high score table.

Thought not being overkeen on this type of simulation I was quite impressed by Geoff Capes Strongman. Unlike other sport type simulations, this one was not wholly dependent on joystick waggling. The muscle selector is a great idea - combined with the effort selector, quite a bit of control is available over Geoff. For a one-load game, there is quite a lot of score, with the six events being quite different from one another. This is definitely one of the best games of this type to appear on the Spectrum. Worth a look at over the yuletide season.

Sports simulations have become a bit long in the tooth now but Martech's latest release injects new vigour into the now worn idea. Because the game doesn't depend so much on smashing your joystick it is much more enjoyable.

The graphics aren't that impressive and the game suffers from a distinct lack of animation, but overall it presents a fair challenge. This type of game is very playable but after you have played all the events it can start to get a bit boring.

Geoff Capes is definitely one of those games worth getting if you know you like the type.

I liked the way in which reaction skills as well as joystick-destroying ability have been combined in this game. The events all present a fair challenge - with the possible exception of the Log Chop, which is graphically uninspiring and fairly simplistic.

You just have to crank effort up to maximum and keep pressing the fire button at the right moment. Overall, a nice competitive game, from a different mould to Daley's and the rest. The tunes which accompanied each event were quite jolly, too!

Control keys: Q to T left, Y to P right, 1 to 0 up, A to L down, SPACE to fire
Joystick: Kempston, Interface 2
Keyboard play: not recommended, especially for building up strength
Use of colour: effective
Graphics: nothing special, really, but adequate
Sound: appropriate tunes at the start of each event
Skill levels: one, getting progressively more difficult
Screens: 6 events, plus High Score table and training screens

Geoff Capes is definitely one of those games worth getting if you know you like the type.