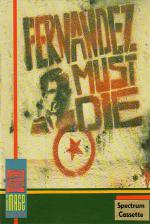 "Tora tora tora! Scream and die, right-wing anarcho-syndicalist lackeys of the bourgeois counter-revolutionaries!" Or at least, theft's what they would have called the game if they could fit it on the box.

The fact is that Fernandez Must Die is not the searing examination of South American revolutionary politics you might assume, but a relatively straightforward Commando-style scrolling-and-shooting game which fails to live up to its promise.

The original game design was produced by programmer Tony Crowther (remember him?) and David Bishop. It's brilliantly original: "You move around the screen shooting things. Thank you Mr Maxwell, can I have my £2000 now." I could have done that. You could have done that. Anyone with a bit of sense would have come up with an original idea instead.

Anyway, we're left with a top-down view of a large playing area, represented largely in monochrome. Your character, and the odd passing aeroplane, are coloured red, with the result that a charming little square of attribute clash follows you everywhere you go. It would have been smarter to leave the colour off altogether, but apparently the number of moving objects on screen made it impossible to keep track of your character without a dab of colour to help you.

Your task is to rescue prisoners, destroy enemy emplacements and wipe out the eight members of Fernandez' vicious military government (or junta, as Mirrorsoft love to say with a heavy South American accent).

As you progress up the screen - which flips disconcertingly onto a new area every so often - you will be attacked by enemy soldiers, tanks, planes and boats. The soldiers are easy to knock off with a single shot, and the tanks and boats can be destroyed with a grenade if you hold down the fire button. Passing planes drop fast-moving, target-seeking paratroopers, which you'd be well advised to avoid, but they also drop ammunition supplies and red cross parcels, which do no end of good for your weapons level and energy status. You can also jump into jeeps, and drive them merrily up the screen running over soldiers, though eventually you'll have to disembark as you come to unpassable obstacles.

It should be said that the 128K game music is excellent, though the optional sound effects are only average.

To help you in locating the eight command posts, you have a map display. This can be accessed by pressing 1, and shows the posts and connections between levels. The connections are via side doors, and blasting your way through gets you into a fortress. Here you have to shoot fast to keep off the guards, and free prisoners from wall cages using your grenades. Freeing prisoners gives you a points bonus, and by exiting the fortress on the opposite side you can move to another area of the map. There's not much variation to the game, unless you count the excitement of blowing up the odd building to see if there's any ammunition in it. The background graphics are pretty poorly designed, with hills resembling cowpats and land-mines like blancmanges.

Fernandez would be a pretty good budget game, but for a full-price title you expect something more than a re-hashed Commando clone with dull graphics.

Unremarkable variation on the Commando theme.

Unremarkable variation on the Commando theme.