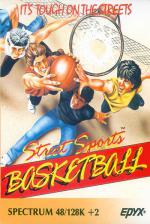 Yo! Slamdunk! Well crucial! Squoddlyl (I made that one up). All these are things which you might be expected to shout while playing Street Sports Basketball. As I understand it, stealing hubcaps or selling drugs in playgrounds, but Epyx tactfully decided to show them playing basketball instead.

You can play against the computer or another human, and the first task is to pick teams. You're shown a motley array of thugs with nicknames like The Slammer, Captain Hook and The Brain. There are even a couple of token girlies to add a bit of variation to the playing styles. Each player has his own characteristics; speed, powerful jumps, accurate passes or whatever; many also have disabilities, like Theo whose peaked cap sometimes slips over his eyes.

After spinning a computerised coin to decide who has first pick, the two players choose three 'dunkers' each. You then get to choose a background; playground, alley, suburban street or parking lot. Once everything has finally loaded - and this is a major three-cups-of-tea business - you can get on with playing the game. At each side of the screen appear the players for each team, while the play area scrolls left to right in the centre of the screen. The backgrounds are nicely detailed, but it doesn't seem to make much difference which one you choose to play against; oil slicks and high curbs are supposed to affect your performance, but I didn't really notice them.

Gameplay is at once simple and complicated, as silly oriental people say. All you have to do is move the chosen player around, blocking your opponent's moves, until it's time to tackle, pass or shoot for the basket, all of which are done by pressing the Fire button. Turning your back on an opponent makes it harder for you to be tackled, and type of shot, jump hook or slam dunk, is chosen automatically. The complicated part is that, unlike other sports simulations, where joystick control automatically passes to the character nearest to the ball, here you have to hold down the Fire button until the player you want to control is highlighted at the side of the screen. The problem is that you tend to forget to do this in the heat of the moment, and assuming that the closest player to the ball is under your control, you zoom off in the wrong direction and leave the mohicaned punk Pogo to slam in another.

You can set the number of points needed for a win before the game starts, but there's nothing much else in the way of sophistication, like penalty shots, time outs, fouls, all the little things which make basketball a sport rather than a game. So if it's an accurate simulation you're after, forget it.

Dreadful music and sound effects add nothing to the game. Overall a great deal of effort has gone into adding the illusion of sophistication to something which plays no better than the average budget game.

A flashy program which doesn't satisfy as either a simulation or an arcade exercise.

A flashy program which doesn't satisfy as either a simulation or an arcade exercise.