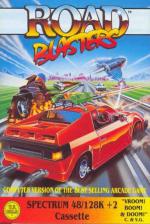 Frustrated drivers can now buy a little black box called The Avenger. It sticks to the dashboard of your car, and has three buttons. If you're overtaken by some yuppie in a Porsche, can stab at a button to activate three sci-fi sound effects - laser, grenades and death rays. Well Roadblasters gives you the same sort of perverse enjoyment, only this time the cars definitely aren't stationary.

Roadblasters is a long overdue type of game; a car race which allow you to blast your opponents to atoms rather than going through the boring business of overtaking them.

There isn't a tremendous amount of challenge in Roadblasters; it's very difficult to spin off the road, and it's very difficult to miss your targets. In fact I got through to level 10 without having to pay much attention. However, there are 50 levels to complete. The main problem is that unless you pick up a Nitro-Injector to increase your speed, things don't get very fast.

Oh yes. These extra weapons. Well, rather than running into them, you have to catch them as they fall from a passing flying machine. They land on your roof and squat menacingly, and can be activated by pulling back on the joystick. Extra weapons include cruise missiles, which act as a sort of smart bomb, UZ cannon which fire faster than your ordinary everyday bonnet-mounted machine-gun; and electro shields which protect you from enemy missiles, collisions, mines and road spikes. All these special weapons last for a limited amount of time, shown on a diminishing bar.

So you have your weapons, and you're zooming along the scrolling road looking for trouble. It won't take you long to find it. Enemies include sleek, fast Stinger sports cars; heavily armoured Command Cars; fast-moving road rats; evasive motorbikes, and roadside gun emplacements. All of these will try to blow you off the road, and in addition you have to avoid mines, spikes, and puddles of toxic goo which make you spin dizzyingly.

You can veer to one side - rather too far to one side to be realistic - to take out tricky opponents. You can also pick up fuel globes left by destroyed enemies, or appearing in clusters along the road. That's it really; at the end of each stage you get a bonus depending on the number of enemies destroyed, time taken and fuel globes collected.

Roadblasters isn't a terrific racing game, and it isn't a terrific shoot-'em-up. The explosions are very poor, and though sound and music are excellent, you don't really get any feeling of nail-biting excitement. However, there's something very smooth and polished about the whole production, and I'd be telling porky pies if I said I didn't enjoy it at all. Give it a spin and see whether it brings out the roadblaster in you.

Nice-looking coin-op conversion with a bit of racing and shooting.

Nice-looking coin-op conversion with a bit of racing and shooting.