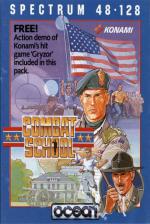 Combat School hasn't been in the arcades too long, but it's rep is one to be reckoned with. Managing to couple wrist/sapping sports-sim endurance challenges with a high-class military outing doesn't come top of the list of Easy Games to Design, but Konami (the original cabinet makers) and Ocean have done it.

The idea behind the game is that you (and a friend if you like) have been packed off to the academy to get trained up for war. In order to make it through to the elite ranks of the puce-berets - or something - you've got to complete seven events: an assault course, three firing ranges, the iron man race, arm wrestling and hand-to-hand combat.

First up it's the assault course. Nice graphics. The screen flips up two tracks, both viewed side on, one on top of the other. If you're on your own you've got 42 seconds to get from one end to the other. The screens scroll from right to left, and everything that moves moves very nicely indeed thankyou. It has to be said that I could get up an extraordinary power rating without actually moving anywhere, and occasionally found myself rooted to the spot after jumping a wall. Looks like a bug to me.

Having negotiated the three different sizes of wall in varying combinations, you come to the monkey-swing. Jump up and propel yourself using your hands. Then it's just a short burst to the line.

If you narrowly fail to complete the assault course, and indeed any of the other events, you'll be sent to the chin-up bars, where you have to complete a gruelling ten dips in order to prove you're tough enough to continue. If you goof here, or miss the initial event by a large enough margin, you'll be catching the next Greyhound bus back to Albuquerque.

The three firing ranges are similar in the respects that you find yourself at the bottom of the screen, spraying away at targets.

There is also the iron man race, which has you running like crazy over a top-bottom landscape littered with boulders, puddles and rivers. You've got to waggle left and right to maintain speed, but also negotiate the obstacles.

THe graphics throughout Combat School are of a consistently high standard. The characters are large and well defined, and they move around quickly. The firing range is especially exciting.

Arm wrestling is probably the least exciting event, though it still provides a reasonable challenge Waggling - again - for all you're worth, you have to bring down your opponent's arm. The screen is viewed from above and is OK to look at. but it's not exactly nail-biting stuff.

By far the best event is the combat with the instructor. Here you're given more control over your character and can punch, kick and jump to your heart's content.

In the unlikely even of you completing all the stages, you are deemed to be worthy of a place on a secret mission to rescue someone from the American Embassy in Bananarepublic - or somewhere. Innovative stuff, this plot. Of course I could tell you about it if I had got to it. But I didn't, so I can't.

Combat School, apart from what is looking fairly seriously like a bug at the start, is great. There is enough variety in the events to save it from being a terminally dull left-right waggle-yourself-to-death affair, and graphically it's the tops.

Ocean's coin-op conversion No 345. And it's good stuff. Can they do no wrong? Knight Rider fades in the memory.

Ocean's coin-op conversion No 345. And it's good stuff. Can they do no wrong? Knight Rider fades in the memory.