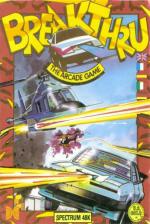 Breakthru is based on yet-another-ruddy-arcade-machine which, in turn, appears to have been based on Spy Hunter. Not wholly original, I grant you, but it's still a damned good chase through all sorts of terrain.

The idea of the game is that the most revolutionary fighter, the PK430, has crashed behind enemy lines (doesn't sound particularly revolutionary so far, crashing and all). Anyway, your objective is to drive through all manner of enemy defences in order to reach the plane. Then, well, I'm not sure, as I didn't come particularly close to this stage.

The graphics are pretty nice, scrolling from right to left quite smoothly. The screen is presented side-on, and an attempt at depth doesn't fall as flat as you may expect, as it's possible to move into the screen by pushing up on the joystick.

There seem to be few problems colour-wise, only becoming noticeably bad when leaping over enormous piles of rocks, causing your car to go a rather horrid red.

Obstacles present themselves in a variety of ways. There are little rocks (I think they are rocks) which do no end of damage to your car, men with flame throwers, helicopters, tanks and jeeps. All of these are very dangerous indeed, and will finish you off with amazing ease.

A slightly more disconcerting fact is that the roads along which you drive will sometimes come to a complete halt. Either there is a huge hole plonked right in the middle, or you come across an appallingly large pile of boulders. Your only option is to hit the space bar and fling your super-mobile into the air. This part is a bit ridiculous, but is the only way out of such desperate problems.

You control your car by moving the joystick left and right, for decelerate and accelerate respectively, up and down for in and out of the screen, fire for Fire, and space for jump.

The game comes in tour stages, each depicted on a map, over-viewing the whole game.

As you progress, things become more and more difficult. Holes in the road crop up with more frequency, little men armed to the teeth will Fire on you more rapidly, and you generally have a tougher time of everything.

It can get pretty hectic, and the only real snag is the fact that you have to use the keyboard to leap into the air. Otherwise it's great.

Breakthru is essentially Spy Hunter edge-on. It's fun, easy to get the hang of, but hard to complete. And it's quite addictive.

Breakthru is essentially Spy Hunter edge-on. It's fun, easy to get the hang of, but hard to complete. And it's quite addictive.