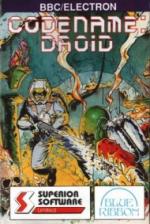 Your task in this budget re-release of Codename: Droid is to find and capture the Volgan's latest deadly weapon and their new spacecraft. To do this you must complete several sectors of play before reaching the end.

Once the game is loaded, you emerge from a space ship and destroy your first Volgan. You enter a lift and then move down to the next sector.

The screen layout is large and is identical to the BBC version. The sprites used on your own man and enemies are large and smooth and actions performed by your man are very realistic and lifelike, including running, crawling, jumping and firing.

A lot of your gameplay time is used up by accessing the wrist terminal that you have fixed to your equipment. It is possible to find all the necessary information needed to complete the game, using this terminal. Functions used are maps of the current sector, remaining lives and energy of suit and blaster, amount of mines being carried, passcards and energy cells left.

During the game, the enemy fire at you and, as you progress onto later levels, they need to be shot more times to get rid of them than at earlier levels. Jet packs are also provided, which are a great help when faced with the problem of overcoming pillars which can only be flown over.

Various objects are dotted around the game area which are needed in order to solve certain problems. Some of these are objects such as springs, spanners and switches, etc.

All throughout the game, you come across mystery packages which are the source of large amounts of passcards and energy cells but you can also pick up single units along your hazardous journey.

One thing that I especially liked about this game is the idea of having a jump facility, so you can automatically progress onto a later level - providing, that is, you have previously finished the said level.

Scrolling at times is annoying but in no way interferes with the main game. I have foun no faults in the game apart from the occasional scrolling jitter.

I would say that anybody who has £2.99 to spare should immediately go and purchase a copy of this brilliant budget game.

You should immediately go and purchase a copy of this brilliant game.