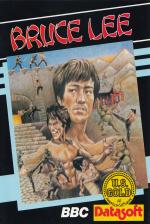 Latest to join the martial arts combat games on the Beeb is Bruce Lee from US Gold. However, despite its name this game is not so much a karate or kung fu epic as a platform and ladders game with oriental overtones.

Bruce Lee is, of course, the hero of the piece and it is him that you manoeuvre around the bits of pagoda and lion statues that litter this region. Pitting his wits against you is the evil Wizard who is understandably upset at your invasion of his fortress.

In classic Bruce Lee style, rather than just fight you outright, the Wizard first sends his minions after you. First, the somewhat unlikely 'Green Yamo', then the well-armed 'Ninja' and finally the Wizard himself.

This game has none of the cartoon graphics and intricacies of movement of the likes of Superior Software's Karate Combat, but it is a sight easier actually to play and have fun with. The game is very fast with a good deal of concentration and fast reactions needed to get anywhere in the fight.

There are a few minor criticisms. The Green Yamo, particularly, shows incredible stupidity now and then, following the same path to receive a sharp punch in the mouth time after time. When Bruce knocks an opponent down he goes into a fast flicker, presumably in sympathy.

However, in many ways Bruce Lee is the ideal the karate game. It is easy to get into, easy to clock up respectable scores of many thousands but still keeps you very much on the edge of your seat, waiting and eager for more.

Other BBC Model B Game Reviews By Geoff Bains

The ideal karate game... Easy to get into, easy to clock up respectable scores of many thousands but still keeps you very much on the edge of your seat.