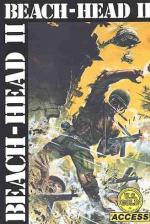 DATELINE: July 1947 - The Dictator is still alive. Despite your valiant efforts to destroy this evil genius in Beach Head, he has escaped and established a secret fortress somewhere in the jungle. He is known only as The Dragon - well, Dick Tator is a rather silly name - his defences are strong; he is holding allied troops as hostages. Only you can take on this mission to rescue them, Ramb... oops sorry - Chief Commander Stryker.

Like its predecessor, Beach Head II is a four part arcade game, filled with machine guns, mines, helicopter gunships - in 1947? - and general carnage. But this time the mission is on a smaller scale.

First things first, though. Choose whether you want to play the part of goodie-goodie Stryker or that crazed tyrant and all-round-fun guy, The Dragon. Find a friend and you can even play head to head and attempt to obliterate each other simultaneously. Then there are the three skill levels if you're playing against the computer.

Part One: Attack. The first thing Stryker has to do is drop his troops safe behind the cover of a wall. While the chopper is invulnerable the men aren't, so he drops them as low as possible, though if he flies too low their 'chutes don't open, which serves them right for jumping from a helicopter. Meanwhile The Dragon takes pot shots with a machine gun which has vertical range controls as well as horizontal direction. Though you won't run out of ammo, indiscriminate fire is unwise as it makes targetting slower.

From the cover of the first wall Stryker has to run his troops from one of three gaps across exposed ground. As the gaps flash like Christmas lights, pressing 'fire' chooses the opening which is currently illuminated, and left or right chooses the soldier's course. Once they reach the cover of the second wall they're in need of a rest, so an equal number of enforcements join them.

Now there's just one gap, directly in the line of fire, though you can send a man over the top while some foolhardy - sorry, heroic - comrade runs into the path of the gun, drawing the fire trying to lob a grenade while in position. There are points for each man clear, and a bonus for each emplacement destroyed.

The main problem with this action is one of control. In an attempt to get all the action in one screen the figures are tiny and the response times seem a little slow. But if keeping the Allies up and running is hard enough, The Dragon has a worse time. The line of tracer bullets can be difficult to see.

Part Two: Rescue. Don't worry about the previous criticism; in this next section the Allies have captured the turret so it's their problem. The prisoners march across the screen, left to right, apparently oblivious to the mayhem.

Meanwhile, The Dragon throws all he's got at them. When you learn that this includes rocks dropped off the roof you'll realise that this isn't much. He also has a tank without ammo, but luckily the prisoners are so numbed by their ordeal that they walk straight into its path. An armoured car can gun them down but sneakiest of all is a mobile trap door(!) from which a little figure can emerge to lay mines.

Stryker has to shoot all these obstacles and clear the path for the pole-axed POWs, some targets calling for careful aiming. This time the enemy has the advantage, even though the selection technique calls for some odd joystick shifting.

Part Three: Escape! Back to the helicopter and it's time to fly any survivors out to freedom. Stryker has four possible routes, of varying difficulty, though he can't tell which is which, so it pays not to out all his eggs in one basket. Once he launches a chopper it's a question of steering left and right across a scrolling screen, blasting buildings and avoiding the enemy tank fire.

Part Four: Battle. Neither side has any advantage here unless it's the one player game - in which case it's fairly simple to beat the computer. Stryker has tracked his enemy to some underground caves, but they've obviously had enough of blasting each other with bazookas so they indulge in some ancient native trial of strength.

Sticks and stones will break their bones, as they hurl 'poonta' sticks at each other across a chasm. Baseball skills may help Stryker here, as straight and curved throws are possible as well as ducking and jumping.

That's it then, and while Beach Head II is no classic it is different from the original. Perhaps the parts don't make up a satisfactory whole and the tiny graphics are hardly impressive, but if you were a fan of part one then this is worth a look.

Perhaps the parts don't make up a satisfactory whole and the tiny graphics are hardly impressive, but if you were a fan of part one then this is worth a look.