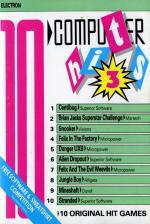 10 Computer Hits 3 is a compilation consisting of ten games spread over two cassettes.

Tape one starts with Centibug where a segmented nasty dodges through the mushrooms intent on your destruction, while you and your laser attempt to serve him the same. This is not one of the better versions of this game although it is fast enough to be a challenge. Graphics are smooth but the sound is unimaginative.

The next offering is Brian Jacks' Superstar Challenge where you tackle the man himself in eight different events. Success is not dependent on pure key hammering but on your skill in manipulating the necessary keys. Sound is almost non-existent but graphics are superb and rate a 9 in their own right. With events ranging from cycling to canoeing and from swimming to squat thrusts it could take some time to master. My only grouse is that events cannot be practised but must be taken in order.

The third game is Snooker with options for one or two players and a choice of either ten or fifteen red balls. Graphics are hard to fault and if two people have plenty of time and patience then it's great. However, the game is slow and the movement of the balls is sometimes unrealistic. It should be noted that the one player option is not against the computer but one player taking all the shots.

I like Felix In The Factory, a ladders and levels game where your aim is to keep the generator topped up with oil despite the attentions of evil gremlins and a conveyor belt full of parcels to scramble over. The graphics are great, the sound is superb - but why such a terrible choice of keys? A for up and Z for down is quite normal but P for left and the up and down cursors for jump and right respectively seems a strange choice.

Tape one ends with Danger Uxb where you cross blocks to defuse the bombs. The blocks disappear as you move so watch the route you take or the next bomb is harder to reach. Gain extra points on the way by collecting the flags but avoid the skulls or you will lose a life. On higher levels you have a reduced time limit to clear the screen, and you are harassed by a pair of Doc marten boots intent on stamping you flat. Sound and graphics are excellent and the game is most addictive. One of my favourites.

Tape two opens with Alien Dropout, an invaders style game with the variation of mutant moths. These settle in boxes at the top of the screen allowing you to shoot them from below and only escape to attack you when a particular box is full. This might have been addictive once upon a time but it looks very dated nowadays. There are six different skill levels but they do little except speed up the action.

In the second game on this tape, Felix Meets The Evil Weevils, our hero travels about his factory using aerosols against the mutating weevils and dodging ball bearings rolling down the chutes and conveyors. Excellent sound effects and nice chunky graphics give this game a very high rating.

The game Jungle Boy started life as Tarzan Boy and your task is to negotiate screens to rescue Jane. These screens are so packed with pitfalls and peril that the real Congo must seem tame by comparison. There are cheetahs, rock dropping gorillas, a relative of Hissing Sid and, as a reminder of the original publishers, there's even a comparatively benign alligator. Colourful, well drawn graphics make this one of the best arcade adventures around.

In Mineshaft you move through screens of skeletal graphics collecting what are supposed to be lumps of coal while dodging various hazards. I've seen better games in magazines listings.

The last game is Stranded, a graphics adventure which starts with you stranded on a strange planet and looking for a way home. I have had this game in my collection since its original release and for anyone tempted to try a comparatively simple adventure game this is one of the best.

Despite the criticisms there are enough first class games on the two tapes to make this compilation very good value overall.

Despite the criticisms there are enough first class games on the two tapes to make this compilation very good value overall.