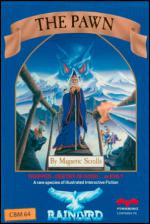 The Pawn is just about the most exciting thing to hit the Adventure scene since Infocom produced Zork. As a text adventure, it arrived rather quietly some months ago, from Sinclair, on the QL. It is about to stage a second-coming, with graphics, and to deafening applause, on a wide range of computers including the Amiga and C64.

The objective of the game is not at all clear at the outset, but it is fairly obvious that trouble is brewing in the shape of Farthington Real Ale. This product has displaced the Kingdom of Kerovnia's strong malt whisky, along with its producers, the Robbikyoub dwarfs, King Erik's land is in a state of ferment (so to speak), and its citizens are becoming rebellious, a situation of high (specific?) gravity?

As you wander the forest paths of Kerovnia, chances are that Kronos, the evil magician, will zoom up, comfortably seated on his nifty stone hovercraft. It's you he is after, and he has a proposition to make. Decline to accept it, and he will keep pestering you, from time to time. Continue to refuse it at your peril! So, eager to please, off you go in search of a Princess.

One of the skills in designing an adventure like The Pawn, is to make the boundaries seem natural. There is nothing more disconcerting than coming up to a dead end in the middle of an open plain! The Pawn achieves this outrageously! "Notice! This is the southern edge of the Adventure. No artefacts may be taken beyond this point." And before you lies: a dotted red line!

The sense of humour running throughout the game, makes it entertaining, as well as puzzling; to play. Commands that most games forget come in for special treatment. For example, if you speak to someone, but forget to address them in the correct mode, you are asked "Are you talking to yourself again?" If you were to answer YES, most games would fail to recognise the word. Not so Pawn! "Just checking," comes the reply.

This mischievious but puzzling plot, is enhanced, if not, in fact, made possible, by an incredibly intelligent parser developed by Magnetic Scrolls, the team who wrote the game. Over three years in the making, it will handle the most complex of command with an apparent ease.

All adventures, however larger, have a finite map, and come across Honest John, a salesman with a cart, you may ask: HOW MUCH IS ALL ON THE CART EXCEPT THE (object) EXCEPT THE (another object)...

If you don't wish to accept what Kronos gives you, you can, for example, reply I HAVE NO INTENTION OF TAKING IT with no trouble!

GET THE KEY. "Which key?" At this point you can choose between METAL, METAL KEY, or, if it is in your pocket, THE ONE THAT IS IN THE POCKET.

In fact, putting things in things is one of the specialities of the parset, and it can cope with 25 levels! Imagine the twisted puzzles that can be concocted for adventurers, with these sort of facilities! What you can do down in the potting shed, will not only amaze you, it will earn you points towards you goal of 350.

There is text galore to read, and every detail seems to be covered, down to an innocent bowl of rice, which, when examined, turns out to be Uncle Ben's Short Grain!

A feast for text adventurers, then. But the graphics on the Amiga are destined to convert the puritans to a new faith! Pictures fit to grace your front-room wall are to be found here, and they can be slid up and down the screen, so that the graphics/text boundary is left just where you want it. They can even be turned off altogether, if you do not appreciate art.

Not all locations have a picture. They contain so much detail they won't all fit on one disk, so only 35 pictures accompany the 100 or so locations in The Pawn. Although the screenshots shown here are taken from the Atari ST version, the Amiga graphics, not quite ready yet, will be almost identical.

Most versions will be released around June, and to buy one for the Amiga will set you back about £25. The C64 version will be in text-only, and a separate C128 version, may or may not have graphics - that is yet to be decided. Non-graphics versions will probably be priced in the region of £15-£20. Graphics or text only, if you have one of these machines, don't miss The Pawn - at any price!

A feast for all text adventurers... Don't miss The Pawn at any price!