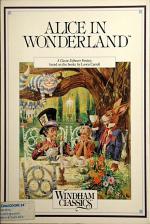 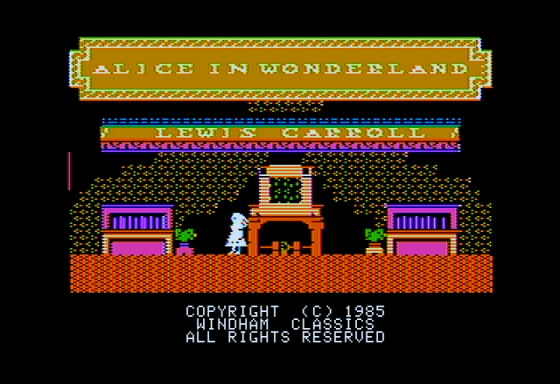 This is a disc game in the Windham Classics series from Spinnaker Software and it falls right between the arcade and text categories. There are occasions when skill with a joystick is necessary to be able to make progress - there are also problems to be sorted out.

The method of play is by joystick only, but text commands can be entered by pulling the joystick towards you and pressing the button. You are then presented with a list of verbs (text icons perhaps?) and by moving a highlighting cursor across them and pressing the button, you can select the verb you want. A suitable reply will then replace the verb list.

In this underground world you must manipulate Alice to run, jump, crawl and crouch, to get to many of the locations in the game. If Alice is in possession of a parasol, then she can float downwards instead of falling abruptly (for which there is a time penalty) should she miss her target when she jumps. While in "parasol" mode, which is achieved by holding the fire button down, she can also be steered. 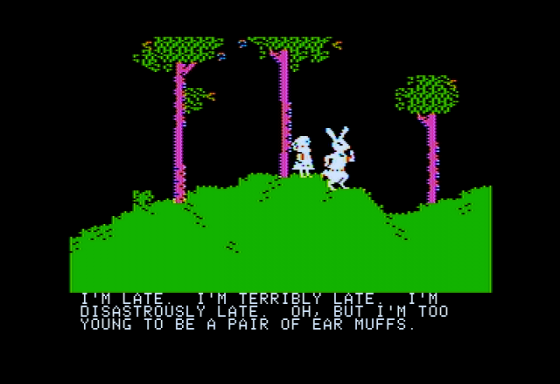 There is a large adventure map, and each picture is read in from disc as Alice moves from one location to another.

In the game, you will meet up with a number of well-known characters, such as the Queen of Hearts, the Dormouse, a white rabbit, and even Lewis Carroll himself. When you meet up with someone, if you can get them to sing you a song, from then on you too can sing it. Singing a song to someone sometimes has pleasing results and is a useful activity!

Play takes place over 65 days and some events and exits depends upon being in the right place at the right time. You can question what day it is, but the time of day is displayed on a number of clocks that are part of the furniture in some of the locations.

I found Alice In Wonderland just about scraped into the Adventure category - but you need a good joystick hand! It is a charming game which should delight the younger computer games player and plenty of older ones as well.

Alice In Wonderland is from Spinnaker Software for the C64, Apple II and IBM PC.

A charming game which should delight the younger computer games player and plenty of older ones as well.