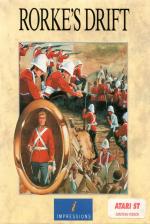 Imagine yourself as a British soldier 111 years ago. If you were really unlucky, where would you be? North Natal in Southern Africa, that's where. Way back in 1879 the British followed the Boers to the Transvaal to search for goldmines. Not surprisingly, Zulu tribesmen grew tired of the occupation and decided to kick some white ass.

In the ensuing conflict 50,000 Zulus, led by their warrior king Cetewayo, beat the crap out of the British Redcoats at their camp at Isandhlwana. Mind you, armed with only spears and loud voices, over 45,000 Zulus bought it in the process. 4,000 limped on toward the British outpost in Ulundi, known as Rorke's Drift. It consisted of a church, a hospital with 36 disk soldiers and 101 able-bodied Royal Engineers.

In the game of this historic scrap you use icons and mouse to send orders to these troops. Soldiers fight and shoot, medics tend the wounded, storemen replenish dwindling ammo and officers use pistols for short range defence.

Your first task is to prepare for the coming onslaught by positioning men in strategic locations around the map. Hiding behind barricades of crates and mealie bags is hardly the safest place to be, but at least it's better than being out in the open.

When the time runs out - coming, ready or not! - the Zulus arrive. You then have the desperate task of loading each man's rifle, firing it at an attacking Zulu, clicking on another, reloading, resupplying the empties and aiding the fallen. You do this by pausing the action and issuing one order to each man. Each shot registers either a hit, a miss, or a level of wounding for the Zulu.

Meanwhile you're talking spears in the gob, as well as the aforementioned white bottom, and reports warn you of your impending rout. It's up to you whether the soldiers stand and fight or do the sensible thing and run like hell.

This goes on and on until dawn the next day - provided you survive that long.

Rorke's Drift suffers from appalling graphics and one of the slowest screen scrolls that's ever appeared in a full-price game. Blocky, badly drawn Redcoats and short, fat Zulus who look like the golliwogs on Robertson's jam jars make the whole thing comical: the Zulus were actually renowned for being tall and frightening.

Music consists of an annoying patriotic tune that sounds like it's played on a toy piano. Sound effects are wholly and unforgivably absent. Worst of all, though, is the operation of the game itself. The cursor is jittery, occasionally disappearing completely, and mouse buttons have to be held for ages before anything happens. Characters don't always move where you want them to, and screen updates are desperately slow, even in non-active parts of the game.

Poor programming is to blame for Rorke's Drift's failure to convey any atmosphere or excitement. There are no North And South-style action sequences, beyond what you see at the start. Compared to Turcan scenarios like Armada and Waterloo, Rorke's Drift has no obvious battle logic. It's just random, toss-of-a-coin stuff. The game may have marginally better graphics than UMS, but none of its operational ease.

This is a shame because the Zulu war is an ideal choice for an exciting wargame. The immense difference between the opposing sides' manpower and weapons makes it a perfect contender for a rip-roaring battle. As far as Rorke's Drift goes through, I'd rather have been there than play it on my ST.

Poor programming is to blame for Rorke's Drift's failure to convey any atmosphere or excitement.