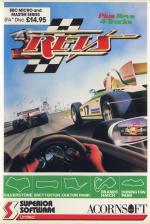 This game is another one of the re-releases of games originally produced by Acornsoft, but it was so successful the first time that Superior repackaged it and released it again. They were dead right to do so because this is one of the most accurate racing simulations ever to hit the disc drive of a home micro. The concept of the game is simple, you drive your formula 3 car (viewed from inside the cockpit of the car) as fast as you can, in order to get as good a lap time as possible. Although it seems simple, it is very much harder in practice. For a start, this is no mickey mouse game, everything is modelled on the real world, the car can skid, it won't respond very well to sudden jerks of the steering wheel, and bumping over the grass can seriously damage your car!

There are options for either practising one of the five circuits supplied (Silverstone, Snetterton, Donnington, Brands Hatch or Oulton Park), or taking part in a race - take it from me, for the first 100 times go for the practice, it's embarrassing how bad you are at the start! Although this game has a very steep learning curve, it is not a matter of getting bored, the manual leads you through the game and how you should drive the car, and even takes you on a lap of the Silverstone track written by David Hunt, former champion. This really adds an extra dimension to it and helps you really immerse yourself in the game. Although the car, like in real life (probably, I don't know) it is very hard to drive a car with the degree of skill and accuracy as they do on the telly, and you will find yourself spinning helplessly off the track time after time. But take it slowly, learn from your mistakes, and soon you will be ready for the big time - race day. It is tremendous fun to take part in the race, although once you've done that consistently (I haven't yet!) there is even more fun to be had in shaving vital milliseconds from your lap time of one of the circuits. If there was one simulation in the 80's that really worked well modelling a real life situation, it is this game.

The graphics are pretty good, although not in a high resolution mode they definitely look the part - even the steering wheel moves as you turn around the circuit! Gear changing is shown by a little number on the dashboard, and everything is fully functional. Although it doesn't give the greatest impression of speed, it is pretty good, and the sound definitely works for me! The graphics are actually very, very smoothly done, something of a minor miracle as quite a lot of pixels need to be shifted to get the car to move!

The game itself is written by first class programmer Geoff Crammond, who not surprisingly is a physicist at heart. Since this game he has gone on to create two sequels (albeit on the PC) called F1 Grand Prix and F1GP2, both hit games and classics in their own right. In fact, the Grand Prix simulation is something Geoff has made his own since the early 80's, and rightly so, there is no-one to touch him.

A superbly fun game, although probably not to everyone's tastes - but definitely one of the best Beeb games in terms of longevity!

A superbly fun game... Definitely one of the best Beeb games in terms of longevity!
Logout