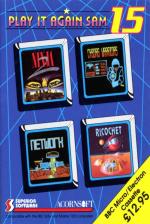 Things may come and things may go, but good old Sam goes on forever. Here we are at number fifteen in this continuing series of re-releases of past 'hits' from Superior Software. Actually, if it wasn't for Superior's support for the Beeb, there would have been little games software available for the Beeb over the last few years, so we shouldn't knock it.

This compilation comprises four games and comes on three discs in both the 40 and 80 track DFS versions. All games are compatible with the Model B, B+ and Master 128. Detailed and well-written instructions are provided in the form of a fold-out leaflet.

First on offer we have Last Ninja II, a martial arts game set in the heart of downtown New York. Your task is to find and defeat the evil Shogun, who for some unknown reason has left the shores of Japan and is hiding out in the Big Apple.

To find your man, you have to work your way through the streets and alleys of the city, avoiding or destroying a vast array of assailants. At your disposal are a variety of weapons including shuriken stars, swords and clubs, and if all else fails, your fists. Apart from the combat, there are a number of puzzles to solve, if you are to progress through the game.

So much for the plot. The game itself has a rather bewildering number of keys and key combinations to contend with. I wasn't too impressed with this at first, and at times my Ninja warrior was performing some strange movements, definitely not what I always intended!

Graphics are quite good, with some nice animation touches, which shows that the good old 8-bit Beeb is still a capable machine. Sadly, the four colour screen mode does tend to produce some confusion at times when two characters are close or plotted on top of one another. A similar loss of detail occurs when characters tend to blur or merge with a background.

Sound is OK but not outstanding, being confined to various squawks and shrieks. Last Ninja II is certainly an action-packed game, and there is no time to hang around in it you are going to be anywhere near successful. As I said earlier, the keys can be difficult to remember and master, and makes this game unsuitable for the young.

Next on the menu is Cyborg Warriors, a new release rather than a re-issue like the others in this collection. Here we have a good old fashioned shoot-'em-up, with a sideways scrolling screen display.

You guide your Cyborg robot across the surface of the alien planet and basically just shoot everything that is thrown at you. You can collect the tokens that drift past you, and this enables you to obtain more powerful weapons to destroy your many adversaries.

If you have seen R-Type in the arcades, or played Nevryon from the 4th Dimension, you will have a good idea what this game is all about. It's very similar in many respects, except that you are guiding a robot instead of a space craft.

There's lots of action in this game and it's lots of fun. Graphics are detailed and colourful with a pretty good sideways scrolling routine with very little flicker. Sound is good too, and when the action gets frenetic, there is quite a wild racket going on: not the sort of game for late night playing! Key arrangements are simple, and it does not take long to get the hang of things.

I am actually rather surprised that Superior has never released this game on its own. I would have thought as a single release, it would have done very well. As a part of this compilation, it is excellent value for money and a very worthy inclusion.

Moving on to the third game, we have Network. This is written by Peter Scott who has done some excellent work for Superior in the past. In this cross between an arcade adventure and a ladders-and-levels type game, you must collect the twenty parts of a machine called the Flynche.

The parts of the machine are hidden on various levels and you use lifts, extending platforms, springs and teleport machines to get you around. As you try to progress, naturally there are the usual bunch of aliens to thwart your efforts, and puzzles to solve too. There are over 100 screens to the game.

I was somewhat disappointed with this game from the word go. The graphics are not what I would call convincing, and the game is a devil to get to grips with right from the first screen, never mind the other ninety-five! I spent some not unreasonable time getting off the first screen, but was sure that I was not fully understanding what I was supposed to be doing.

Hmmmm. Anyhow, I think this game may be an acquired taste, or perhaps just appeal to those who have a sharper brain and are more dexterous than I. Certainly not my favourite game in this compilation.

Lastly, we come to Ricochet. This is an arcade adventure featuring SPRAY (Small Partially Robotic Alien). Different! The idea of the game is to guide our round, bouncing friend through each level to find the hidden hourglass and teleport out to the next level. There are five levels in total, but each level consists of many screens. After each level you are given the password to the next one, so that you do not have to go through those levels already completed.

SPRAT is a rather unusual character to guide around. He doesn't run and he doesn't jump as such. Rather, he rolls and bounces. To get him to move you can roll him along platforms, but to get through doors or up ladders, you hold down a key until he 'squishes' to half his normal size, then letting go of the key releases the energy and then he bounces, off walls, ceilings and anything else. Hence the name of the game, Ricochet.

Graphics are simple but effective, and with some smooth scrolling. There is plenty of good use of colour and the whole thing is nicely animated. Sound is used to good effect but nothing really outstanding.

I like this game a great deal. Just the fact that SPRAY has an unusual way of being moved around makes this all the more interesting than many other games of this genre. Added to that, there is a good challenge to the game.

Well there you have it. Fifteen down and I wonder how many more to go! This is one of the better Sam compilations as far as I am concerned. Apart from my own personal dislike of Network, the other three games I found excellent. Definitely recommended.

One of the better Sam compilations... Fifteen down and I wonder how many more to go!
Logout