1st May 1986
Perry Mason: The Case Of The Mandarin Murder
By Telarium
•
Commodore 64 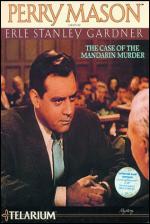 Perry Mason: The Case Of The Mandarin Murder

There was a broken statue scattered all over the apartment floor, and a gun next to where they found Victor Kapp's body. He'd been shot in the back, and the gun belonged to his wife Laura, who was wandering round in a state of delirium.

Laura was carted away to prison, pending trial, and kept under heavy sedation. Trouble was, only the day before, she had been to see you, Perry Mason, world famous criminal lawyer, to ask you to take on a case for her. You had agreed to see her the next day to discuss matters. Now, suddenly, you find yourself about to defend her against a murder charge. Will you be up to it?

Remember Perry Mason? He's the fictional detective created by Erle Stanley Gardner, and was played by Raymond Burr in a television series some years ago. The game presents one of his cases, in a very realistic simulation.

There are two stages in the game, which is quite different from most adventures. Before the trial begins, you can visit the apartment under the watchful eyes of the police, to view the scene of the crime.

Here, you get the chance to examine everything down to the toilet, (Which turns out to be a standard Grade A All-American model). There are areas the police still have roped off, and it's all too easy to try their patience and get thrown out prematurely, before you've had a chance to get the maximum benefit from the visit.

Next you can move between your office and the prison. The office is where your legal assistant, Della Street, works, and where your private eye, Paul Drake, will leave reports on any investigation you have asked him to carry out (and perhaps a bit more besides). A visit to the prison is rather depressing; Laura does not make much sense, and most of her mumblings are incoherent.

Having discovered all you can, you enter the second phase, the trial. This is the major part of the game, and where you are put to the test. You are 'steered' through this rather clever simulation, and your commands consist mainly of questions to the witnesses. There are first questioned by the DA's men, and between questions you can wait to hear the answer, give instructions to Della or Paul (who can investigate and report back while the trial is in progress) or raise an objection.

Mind you, you must be careful to have good grounds for objecting. If the objection is not sustained by the judge, the jury may think you are being deliberately obstructive, and draw their own conclusions.

There are plenty of suspects, and not all of them are witnesses. Some witnesses have things to hide, and it's up to you to try to hit their weak point, with questions like: Miller, describe your relationship with Victor. Commands can be quite complex, and a comprehensive guide is included in the package, detailing not only the game's vocabulary, but the command structure in a table of columns. In practice, this isn't as complex as it sounds. Nor are the legal rules governing grounds for objections.

After each witness leaves the stand, you are presented with the jury's attitude towards your cross examination. If you get really stuck for a question, there is always Della on hand to give you a few suggestions. What really counts, of course, is the jury's final verdict, for your objective is to get your client off the hook, and, if possible, discover the identity of the murderer.

So far, I have only seen poor Laura taken away in handcuffs at the end, and I get the feeling that the plot is far deeper than I at first suspected.

Perry Mason: The Case Of The Mandarin Murder

Commands can be quite complex, and a comprehensive guide is included in the package, detailing not only the game's vocabulary, but the command structure in a table of columns... I get the feeling that the plot is far deeper than I at first suspected.