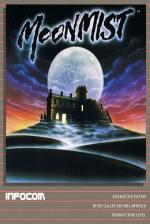 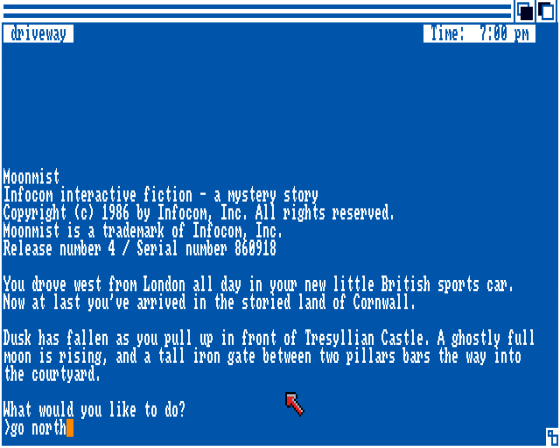 I felt great. After a nice warm bath and a change of clothes, I'd been ravenous. The meal was delicious, and I lounged back in my chair with a port and a cigar, surveying the dining room of Tresyllian Castle.

There was an assortment of the upper crust here, hosted by Lord Jack Tresyllian. I can't say I was overly impressed with their manners. Full of airs and graces, yet they had started in on their meal before I'd even had a chance to hurry downstairs.

The main reason for my visit was to see Tamara. An old friend, she had taken a job as His Nibs secretary, and before long, found herself engaged to the old codger. Her first letter about the ghost of the White Lady, who haunted the castle, I had taken with a pinch of salt. But soon she was pleading for me to help - and was blaming the ghost for putting a live adder into her drawer. The adder had proved to be real, and I felt it was high time I paid her a visit. After all, I suppose I had unravelled a few mysteries in my time. 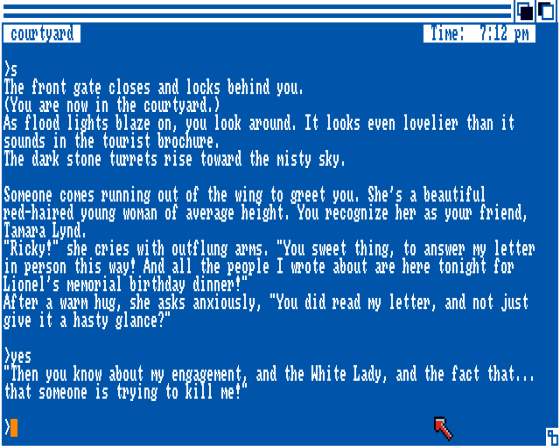 Suddenly, the after dinner chat was interrupted - everybody froze as they heard the voice of Lord J's deceased Uncle Lionel. Having squandered every last brass farthing of the family's fortune, he had hidden one treasure brought back from his many overseas jaunts, within the castle. He was now, on the anniversary of his birthday, setting up a treasure hunt. Look under the punchbowl, he said, for the first clue.

That turned out to be a card with a couple of strange pictures on it, but Lord Jim, it seemed, had been personally given the second clue. It didn't make a lot of sense to me - something about a forbidden fruit.

So after dinner, being the ace sleuth I was, I followed up a lead old Bolitho the butler had unwittingly given me, after he'd staggered upstairs with my luggage. And then it was that I caught his Lordship walking purposefully across the New Great Hall. 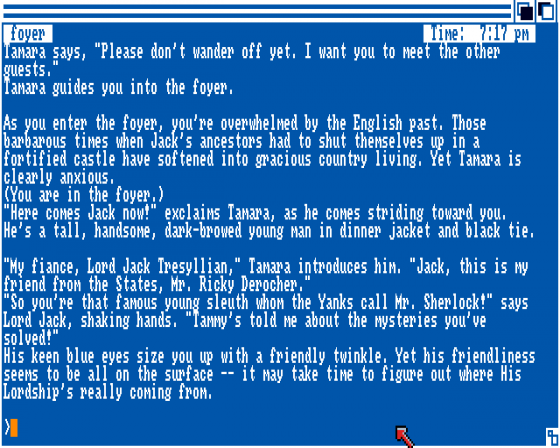 I hadn't had the chance to explore the ancestral home; I had been bustled around and introduced to the upper class twittery as soon as I set foot in the place, before dressing for dinner. But His Lordship, of course, would know just where that clue might be pointing. So I followed.

I half expected Bolitho to walk in and drop a fig-leaf on the table. Better be careful here, or I could end up taking a well-dressed two-legged dustbin back home with me. But I needn't have worried - before long I was the proud owner of a priceless ancient war club. Personally, I'd rather have had the holiday for two in sunny Terrormolinos.

But I not only digress - I'm spoiling this highly atmospheric review! 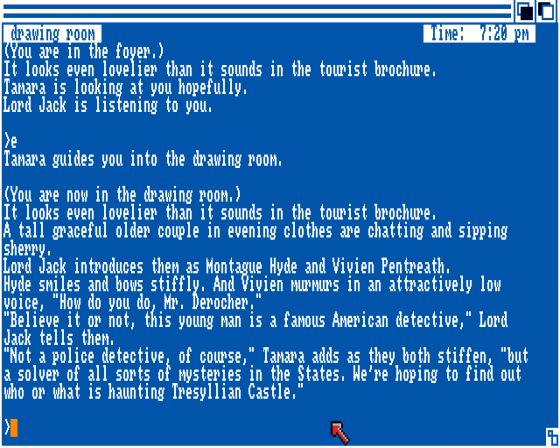 The next thing on the agenda was the unveiling of the 'ghost'. (Despite being an American, I don't for one moment believe in them.) So I explored the general layout of the castle, and found some of the more private rooms not mentioned in the tourists' guide. Anytime after midnight, I thought, and she could be on the prowl.

I had a long wait. But suddenly I saw her - the White Lady! In a flash I used the only weapon at my disposal - a can of anti-ghost spray - but she was gone in a trice (that's a nice aristocratic sort of word) and before I could check out the room of my main suspect, I could hear the creaking of a door in the distance. No doubt, the offending guest was now snugly back in bed, and feigning sleep...

I played Moonmist roughly in time with the 'clock' provided on screen in the game, and have to admit that into the small hours, I was looking over my shoulder from time to time! I won't say I actually screamed when I saw the ghost, but the game is highly atmospheric. 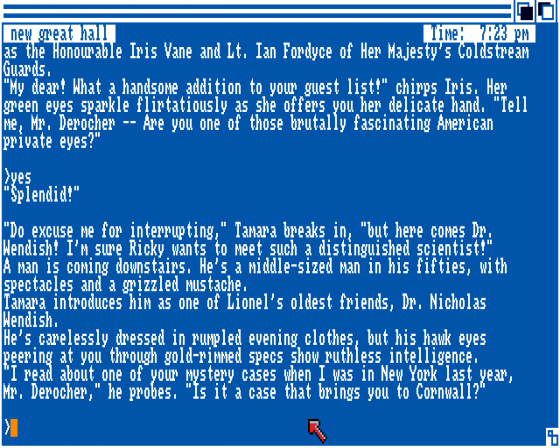 Initially, you are not allowed to explore the castle before the delivery of the clues by Uncle Lionel, so it was by luck that I happened upon Lord James following up the first clue.

To be successful, you have to do all the 'right' things as a guest of one so eminent as His Lordship. So I tried to break the rules - what would happen if I went to dinner straight from my bath, without getting dressed?! The program forced me to think better of it, and remain in my room! Mind you, I did one attend dinner in my Union Jack nightshirt, but the assembled crowd kept a still upper lip, and merely failed to notice my outfit! For my part, I was unable to complete the game!

It's surprising how an adventurer gets into the rut of moving about by slavishly following his carefully drawn up map. There's a very useful GO TO (room name) command in Moonmist, and it took hours of play before I thought of using it! I now suspect that it's not only a response-time saver - it may well be required to move about fast to catch up with the villain, since only one minute game time is taken for the entire trip, as opposed to one minute per normal move.

Talking of response times - they're absolutely absymal on the C64! In particular, the common acts of dropping and taking objects take on age of disk access, before a hesitatingly display reply appears. If you start playing at 7.00pm, it's almost like playing in real time! Surely Infocom can do some tuning to their system to speed up at least the most common commands?

With Moonmist, you get the usual Infocom accessories! This time it's a couple of letters on Tresyllian Castle notepaper, and a glossy tourist guide. Oh, and there's an iron-on Moonmist motif, but I don't think you need that to solve any of the mysteries!

The four games in one have been very cleverly set up. A spooky mystery package that you should enjoy!

A spooky mystery package that you should enjoy!