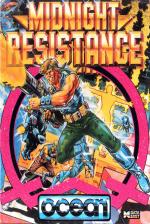 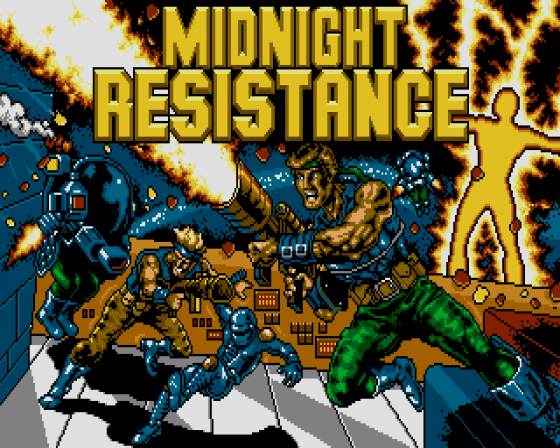 Sometime in the future the tranquil earth is shaken by the return of the evil, once-vanquished leader King Crimson. He's a mutant, a geneticall-engineered powerhouse able to use telepathic powers to control a vast army of bio-mechanical slaves. Under his new reign of terror the Earth is decimated by his savages, and almost all the population is exterminated. Cities are laid to waste as the army marches further south to complete its destruction of the planet.

But one tiny bunch of foolhardy die-hards, all previously civilians, teamed up and became the Midnight Resistance Group. Most were slaughtered by the bio-mechs, and now only two brothers remain. With little in the way of serious military hardware and less in the way of experience, these two hold the fate of the Earth in their hands. It's not looking good for the planet.

You play one of these two survivors, armed with a small and fairly ineffective rifle. Moving off to the right, you confront the enemy, ducking, crawling and jumping, but most of all firing. Simple joystick controls allow fast movement, and the player-character can fire in eight directions, even while lying down. To jump onto objects and platforms you push up on the stick and follow through with the direction in which you want to land. 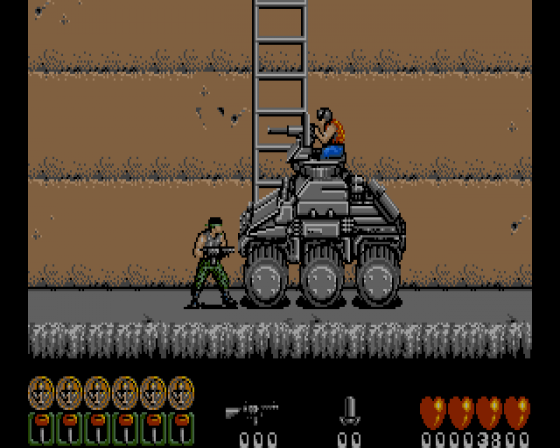 Enemies consist of hordes of strange-looking semi-humanoids, all armed to the teeth. Some fancy footwork is needed to dodge their salvos of bullets and missiles. Occasionally you'll come face to face with a bio-mech armed with a mortar which fires explosives into the air: touch 'em and it's goodnight Vienna. A shot square in the face is enough to pop off these pests, but a different member of Crimson's Corps soon nips in to hassle you still further.

Some enemies carry keys which fly into the air when you kill them. If you can pick them up by running over them before they stop spinning, you can use them later in the game. Trouble is, every time you get thrashed and take a hit, all the keys get scattered again. Sometimes they'll bounce right out of shot and you can't go back and pick them up. Often the key-holding creeps only appear at the start of a level, so you've got to make it all the way to the end without getting into trouble. Easier said than done.

If by some amazing combination of luck and judgement you make it through, a door appears, begging to be shot at. Give it a couple of bursts and it'll cave in. Once inside you find a room filling with flashing lights, glass cabinets and the whine of electric equipment. Inside the cabinets are weapons of a highly desirable nature, if you like that kind of thing (which you do). You can grab a machine gun, a shotgun, homing missiles, scatter guns and nitro packs. Under each display panel is a number of keyholes, showing how many keys you'll lose in return for the weapon inside. The ones you can afford flash and all you need to do is place your man in front and click the button. Barrelled weapons have one major drawback, though: finite ammunition. Before long, you'll run out of ammo and the gun will be useless. This can mean serious problems if you get into trouble. Once you're out, you'll automatically revert to your old rifle, and this won't always cope with the enemies in later levels.

Highlights are reduced to the end-of-level enemies, which usually appear as armoured tanks or huge flesh-chewing circular saws which take a heck of a lot of joystick throttling to deal with.

Sound effects are again the standard boom-smash-crump type explosive noises, along with the rat-a-tat of your gun. Stunning they ain't, and they're unlikely to induce instant flashbacks in even the jumpiest 'Nam vet.

Chances are, if you like shoot-'em-ups, you'll find Midnight Resistance reassuringly familiar. It's guaranteed to be a good long-lasting slog in order to get to the finish. Whether you make it depends on how patient you are and how much repeti- repeti- repetitive gameplay you can stand.

If you're thinking of avoiding pre-exam homework to play Midnight Resistance, it's not a good idea. Geography revision is probably far more stimulating.

Chances are, if you like shoot-'em-ups, you'll find Midnight Resistance reassuringly familiar. It's guaranteed to be a good long-lasting slog in order to get to the finish. 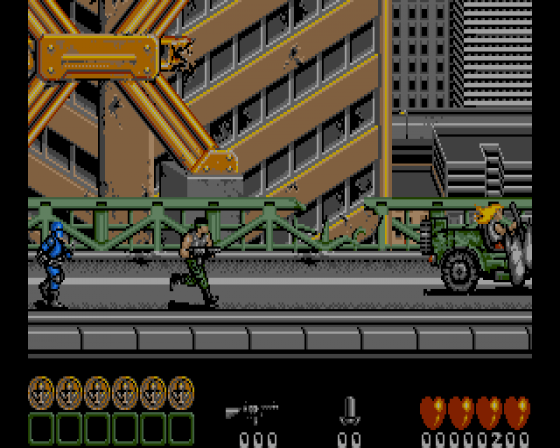 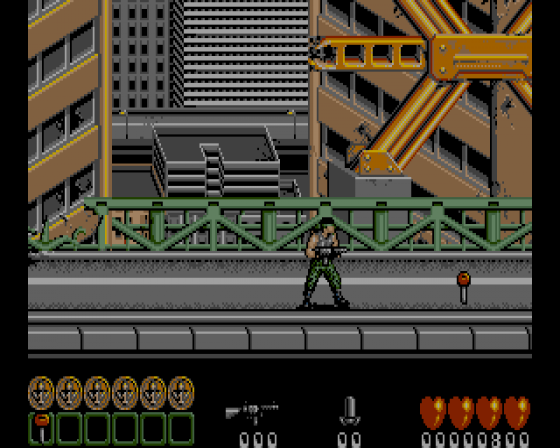 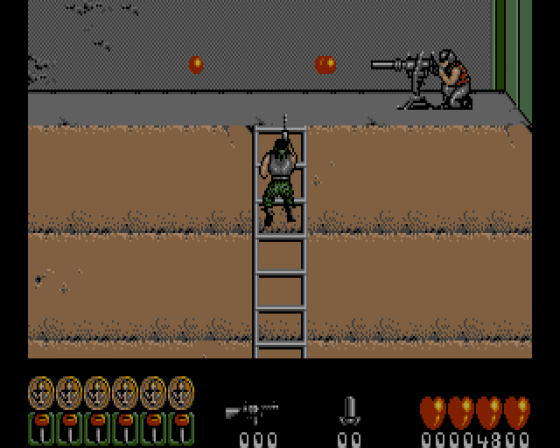 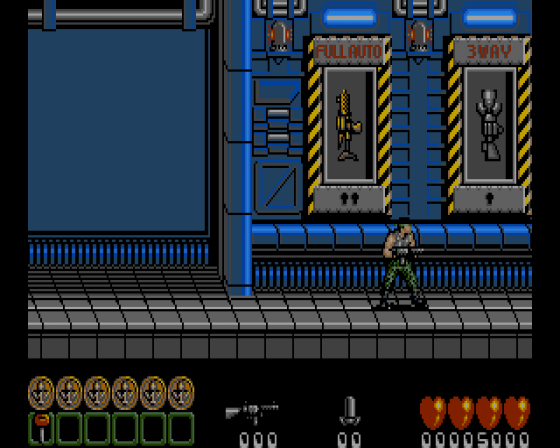 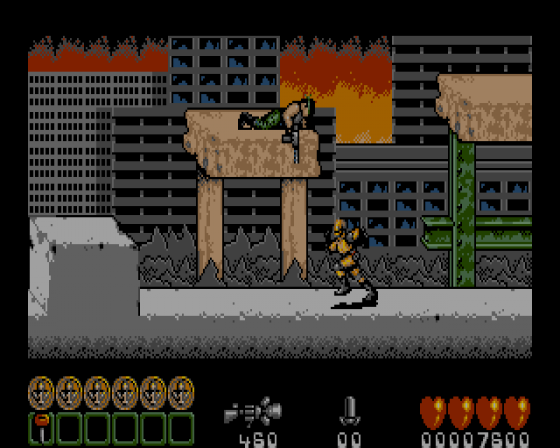 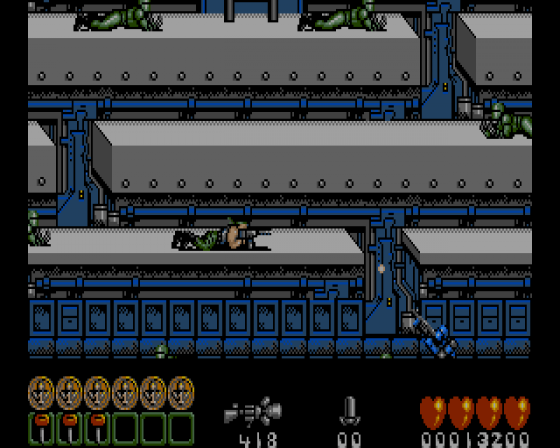 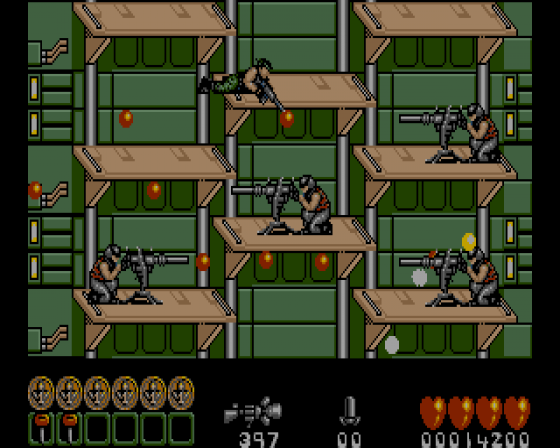 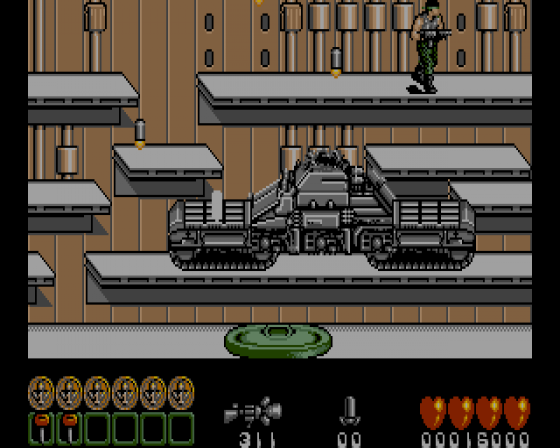