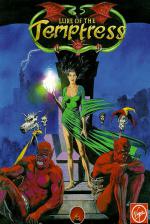 The Brits hit back, with an adventure which promises to beat Lucasfilm at their own game and leave Sierra games standing 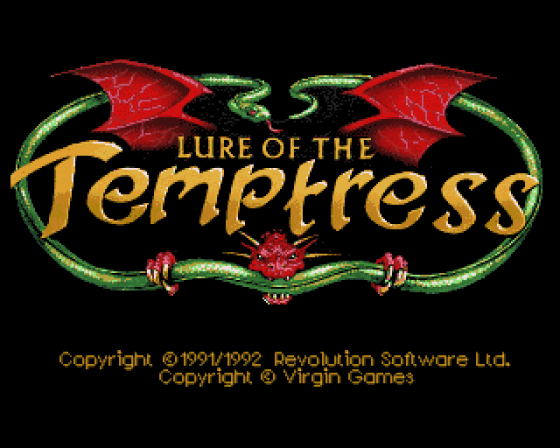 Revolution, a British-based development team, have come up with one of the finest adventure games yet, proving that not all 'big' adventure releases come from the other side of the Atlantic. Make no mistake - Lure Of The Temptress is a very welcome addition to this American-dominated genre, coming across as a sort of mix between Sierra's King's Quest and Lucasfilm's The Secret Of Monkey Island 2.

Indeed, with Temptress' release following so closely on the heels of Monkey Island 2 (also reviewed this issue), it seems appropriate to compare the two. Lure Of The Temptress definitely has a good deal less humour than Monkey Island 2 - it'd be a brave man who tried to beat Lucasfilm at that game, after all - but more than makes up for it in other areas. So how does this more subtley flavoured Brit weigh up to its American counterpart?

The scenario first: you are Diermot, an unenthusiastic hero who finds himself the prisoner of the evil Selena, the Temptress from which the game takes its name. She's taken over the town of Turnvale with her hordes of creepy meathead mutants, the Skori, and to start with you're in no position to stop her. You begin the adventure trapped in a cell, you see, deep inside the dungeons and torture chambers of the evil femme's pad. Your first task, then, is obviously to escape the town, where you can start to do some good, the ultimate aim of the game being to dethrone the evil temptress and rescue an innocent young girl called Goewin, who's been imprisoned by the nasty Skorl. 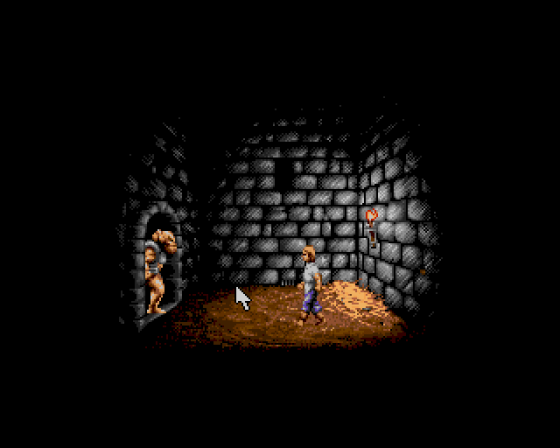 The essence of Lure Of The Temptress is its character interaction. Indeed, Temptress has a lot more of this than Monkey Island 2, and this is the essential difference between the two games. You'll find well over 25 different characters here - all acting individually. They go about their daily life in the quaint, cobbled streets of the town, chatting whenever they please - you might be in a pub having a word with the blacksmith, when an old woman walks up to the bar and has a conversation with the barmaid about her noisy neighbours for instance.

Of course, all this talking proves incredibly useful. To succeed in this game, you must consult and chat with every character possible. And when I say every character, I mean every character - right at the beginning you'll come across a bloke called Wulfe, another prisoner, hanging in shackles from the dungeon wall. He's dying, but in exchange for a drink he tells you some important info to get you started on your quest. Here, too, you'll find the serf joker, Ratpouch, who on release from a torture rack becomes your loyal and faithful servant.

Okay, so now that you're at least a little bit familiar with the game's scenario, let's talk about its mechanics. Much of the gameplay is based on questioning other characters, as I said, which is achieved by first finding someone to talk to, then using the mouse to click on that character. This brings up a menu of possible lines to open up the conversation. You can choose between Ask, Tell, Bribe, or Talk To categories from the list which, when selected, bring up a series of menus to help you construct a sentence. In practice it's not complicated at all - indeed, very intuitive, in many ways more effective than the well worn techniques used by Monkey Island 2. It's more flexible too - you're not limited to a shortlist of pre-prepared responses to choose between. 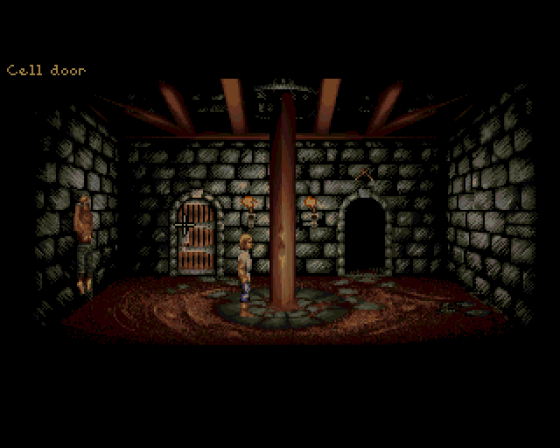 This system enables you to construct some quite out-of-the-ordinary requests. For example, you can ask Gwynn, and old lady in one of the bars, if she has a door. It might not get you anywhere - it's a fairly pointless request, after all - but even though the tongue-in-cheek response you'll get is a fairly standard one that you'll hear a few times in the game, the fact that you're allowed to ask it in the first place helps build a sense of reality beyond the sort of interactive storybook effect you sometimes get from Lucasfilm releases. The trade off is that the jokes aren't as sharp or as well orchestrated as in Monkey 2 - you do get the odd bit of funny stuff, but it won't be long before the same pun is repeated.

Another feature that makes Temptress feel more versatile than either Sierra's King's Quest or Monkey Island 2 is the command option. This is brought up via the game menus and not only proves very useful, it also allows you to set up a few laughs. For instance, there was much guffawing in the Amiga Power office when I sent Ratpouch to the bar. He makes a real twit of himself ordering the beers, you see - watch him get turned down for looking underage, then eventually get served with a shandy.

It isn't all funny stuff, however - in the later stages of the game the command facility becomes very important, when giving the correct order can be a matter of life or death. Your use of commands provides the backbone of this game - it's a very effective feature, one that Sierra and Lucasfilm would do well to pick up on. 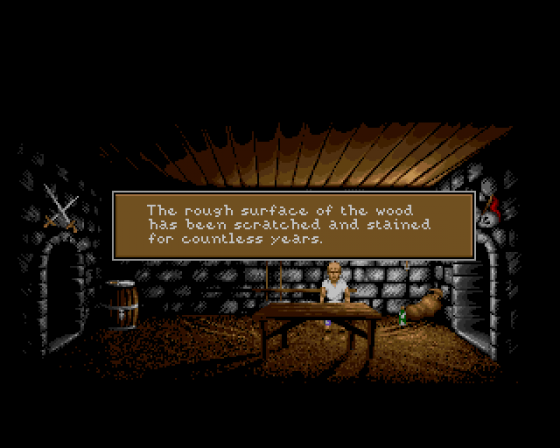 Lure Of The Temptress doesn't fall down in providing atmosphere either - it shares with Monkey Island 2 the fact that it's got bags of the stuff. Indeed, with its quaint olde worlde pubs, cottages and cobbled streets all enclosed by a towering city wall, Temptress' scenery is perhaps more believable (at least to a UK audience) than many we've seen - it brings to mind the historical streets and olde worlde feel of York. Might it be that the Hull-based team behind the game were inspired by their neighbouring minster city?

The great area where Temptress scores over most rivals, though - and especially the otherwise-very-impressive Monkey Island 2 - is in its user friendliness. The minimal disk swapping of Temptress comes as an incredible relief after the 11 disk nightmare of Monkey 2. Though you'd ideally have a second disk drive to get the most fun out of this - Temptress does test your patience with its disk accessing on single drive Amigas - this is by no means the nightmare it could have been.

This is a great game, then. Amazingly, I've got this far into the review without really mentioning the graphics yet - there was so much to say - so I'll make amends now. Visually Temptress is gorgeous - in my book its animation and graphics are just as good, if not better than, those in Monkey Island 2. (A good example is the animated wasp sequence when you reach town from the secret passages - it's lovely.)

So where does that leave us? Well, with is a very big game, full of score, and packed with plenty to keep the avid adventurer content. On their first attempt, Revolution have come up with an adventure game to knock the stuffing out of recent Sierra efforts, and to go head-to-head with its Lucasfilm peers. It's a quite remarkable achievement.

Uppers: A stylish game that shows loads of potential. Mouthwatering graphics and animation surround an expertly written adventure. The great attention to detail prevails throughout the game, while the character interaction and dialogue system is a winner.

Downers: There is very little wrong with Lure Of The Temptress to put your finger on, to be honest. If I had to find fault anywhere it would be the loading, which can be tedious tedious (with loading between every location) when you're running it from the one disk drive.

This game may not be as big as Monkey Island 2, but it's seven quid cheaper and has a hell of a lot fewer disks. It doesn't contain as much humour as Monkey Island 2, but if you prefer the slightly more serious approach to adventures (as I do!) you'll love it. If you're serious about adventure games - even if you're a devoted Monkey-ite - do yourself a favour and check Temptress out. You won't be disappointed. 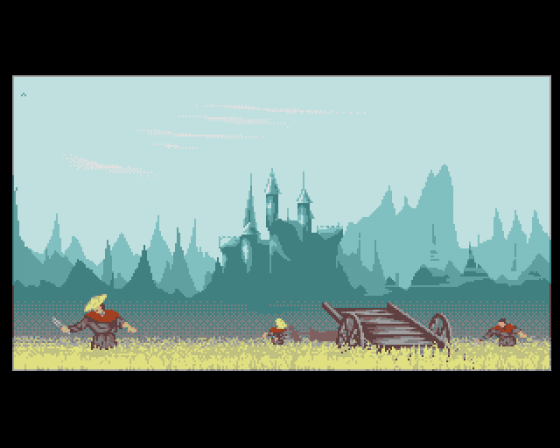 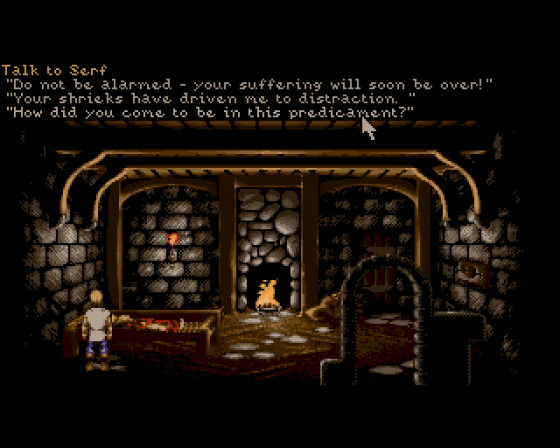