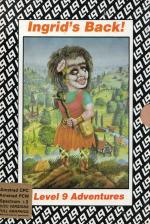 Ingrid's story first started in Gnome Ranger, after she had completed her education at the Institute of Gnome Economics. She is a well-meaning gnome who strives to better not only herself but those around her as well.

Her ideas were sound, but nearly all of her efforts ended in disaster. Her progressive attitude jarred with her traditional gnomic family.

Having her around finally became too much; they gave her a magic scroll which "accidentally" transported her far, far away. Ingrid's journey home in Gnome Ranger gave us an adventure that was both amusing and devious. Ingrid's Back begins shortly after her return. While the family is still trying to think of ways to get Ingrid out of their hair, local events overtake them.

There is a move afoot to transform Little Moaning and the Dribble Valley into a Yuppie Homes development. Jasper Ouickbuck, the lord of Ridley's Manor, is the prime mover in this money-grabbing scheme, abetted by his henchman Silas Crawley.

The villagers have been conned into going to a party, thereby vacating their homes and apparently agreeing to the development. Needless to say, Ingrid is at the forefront of the battle to save the day.

The adventure is divided into three parts, all of which can be played independently. In the first, Ingrid must get all the locals to sign a petition. Not everyone likes to be around when Ingrid is busy at something, and a certain amount of subterfuge will be necessary to get some of the signatures. The only creature that really trusts her is Ropy the dog.

Part two brings back memories of Hitchhikers. Silas, armed with a steamroller and several trolls, sets out to steal the deeds of Ingrid's home, Gnettlefield Farm. Ingrid, again with Flopsy's help, must immobilise both the steamroller and the trolls, trying not to destroy her family in the process.

Having drawn a temporary halt to Jasper's plans, a final solution must be sought in part three. Ingrid goes undercover. Posing as a maid, she goes to Ridley's Manor to unearth evidence of Jasper's nefarious dealings. Her cousin Daisy, already employed at the Manor, proves to be a willing conspirator.

The text is highly descriptive. It maintains the right atmosphere and is often very amusing. There are plenty of quality graphics. The command interpreter is similar to that used in Lancelot - in many ways better, and certainly easier to use, than that used by Magnetic Scrolls.

The flow of play is not restricted for slow typists because generally only the first four letters of a word need to be entered. The use of the arrow keys will bring back commands issued earlier, to be used again or for editing,

Ingrid's Back also makes use of Level 9's go to and run to commands so that once you have mapped out the terrain, you can go or run to wherever you want without having to enter strings of compass directions.

The instruction booklet is clear and concise and includes a few hints on Ingrid's Back and adventuring in general. No game from Level 9 is ever easy; if you get stuck, a hint sheet is available which supplies you with clues without giving too much away.