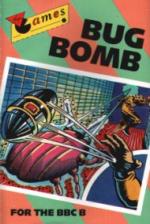 Virgin Games, eager to expand its role in the computer games field, has just come out with three new games for BBC users.

All of the games are of a basically simple type. You won't be getting state of the art stuff for your hard-earned shekels, but at least you will get some solid enjoyment.

In Bug Bomb, your task is dead simple. All you've got to do is to stay out of the way of the nasty bugs that inhabit what's left of the earth's power grid in the far future.

You are Henry, a lone hero poised to save the world's power supply from the death-dealing bugs.

You are also in extreme danger, since as soon as the game begins you have to move fast to avoid the killer insects.

You've very little time to lose in blowing away as many bugs as possible. That's because the bugs can wipe you out as soon as the game appears on screen. At a time when most players are just accustomising themselves to the screen display. So much for sportsmanlike behaviour, at least as far as the bugs are concerned.

Essentially the game is a simple version of Pacman, as you try to outwit your bug foes in a maze whose parameters don't seem quite big enough for both you and the bugs.

In Space Adventure, your objectives are much more complex than in the relatively simple Bugbomb. Here you must kill or avoid the androids guarding vital power packs and spaceship keys, without which your mission is a failure.

If you don't obtain enough power packs, your ability to shoot androids is severely limited, since you need lots of power to fuel your phasers and blasters. You must ensure you've enough residual power in your own life support system. Without it you're dead.

It requires much more than good hand-eye co-ordination, although this helps. You've got to be careful when you use your blasters and phasers and must also keep track of how many more android gunshots your suit can absorb. An android direct hit can zap you only if you're at the lowest point in your life support system, so it's best not to squander away your nine or so lives.

There's also an element of long term strategy in Space Adventure, since you must decide which of the android spaceship's three levels you next want to go to.

This game is imaginative and fun.

Missile Base from Acornsoft. No free lives for guessing that this is Missile Command in splended detail and colour.

It is supplied to the usual impeccable standards. The boxes are durable, good looking and virtually impregnable.

Missile Base is a faultless reproduction of the arcade original but I miss the trackball. If possible, use it with even the BBC joysticks. Keyboard control just isn't worth the trouble.

Beyond that, it's the same old game with all manner of things whose names I can't remember dropping relentlessly on your six cities. A graphical display of the number of remaining missiles on each base would be preferable - numbers are so hard to read when you're defending the World.

A&F Software's Painter is a welcome burst of originality. The cassette may not be the most spectacular looking package you ever bought and neither is the game 100% new. But it stands out from the pack and it is both enjoyable and playable.

In Painter, you drive round a wire frame, painting in the boxes by traversing all four sides. You are pursued Pacman-style by a growing number of chasers and your only major defence is 'gaps'. You can break the lines for a few seconds in up to three places at once. Gaps stop your "Painter" as well as the chasers - so beware.

Paint an entire frame before using up your three lives or the bonus timer and you get a bigger, better screen to start work on. Great fun - and a bit of a challenge.

Now the gripes. There's an instruction screen only for the duration of the LOAD. It goes away once the game's up. Pressing combinations of direction keys can accidentally insert a gap. There are times when a box looks complete but it isn't. And having three different arrangements of direction keys doesn't make up for the lack of a joystick option.

But they're just sour gripes. Painter is definitely non-drip software.

Golem Software has produced a seedy-looking cassette labelled "Games of logic and cunning! Could this be previous cult fodder for the thinkers?" Unfortunately, GOLC demands only a little bit more thought from the users than the designers apparently put into writing it.

You get five games - Auction, Flip, Reverse, Telepathy and Hexa 15. In Auction, you bid against a friend or the computer to buy previous objects. You know the price it will go for in advance, but you're limited to bids between £1 and £10 greater than the last bid. Got it? It's a heavily disguised and slightly modified version of Nim.

Flip is based on a toy called 'Think-a-dot'. In the toy, you drop marbles down one of three holes and they fall through a matrix of eight flip-flops. The all-electronic version is turned into a game by adding the challenge that you can flip all the flip-flops from all being one state to the other in six marbles. I can still do it but the big red mechanical version was cheaper, more fun and much more impressive.

I don't know what Reverse is. It gave a consistent "Bad Mode" error. I suspect because of the disk interface fitted to the review BBC.

Next is Telepathy - a computer-based joke. You're asked to state at a flashing dot and then enter a number. INT(RND(1)), etc. Later your get a silly message saying "Congratulations" or "Concentrate more" and so on.

Last and possibly least is Hexa 15. Could it be hexapawn? No, it's a lucky-dip bag style sliding square puzzle.

Zang Kong, from Solar Soft, comes in a black and white cassette cover. It hardly leaps out from the shelf but it might fall on you. Inside, programmer Christopher Hyde reveals his true personality.

Not that anyone would want to make an ass of themselves by playing Donkey Kong these days. This version has all the relevant balls, hammers and so on but, apart from the almost unanswerable puzzle of how you pick up the first hammer, the game is a little tired.

A faultless reproduction of the arcade original.