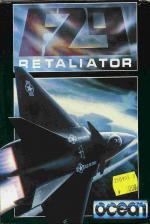 The aircraft designs are a mixture of existing information and foresight. Short Take-Off and Landing (STOL) is the order of the day and enhanced aerodynamics make handling in the air a piece of cake. Futuristic missiles, which shoot backwards, give these planes the edge over those in Fighter Bomber and Falcon.

Like Falcon, you can fly at several military ranks which affect your point-scoring potential and the maximum number of weapons you can carry. Unlike Falcon, your craft's handling characteristics remain the same, but the F-29 is so easy to fly that this doesn't cause problems.

The action takes place in several arenas: a training ground in Arizona, the Middle East, the Pacific, and (big fanfare) Central Europe. It seems odd that in the 21st Century the human race is still slogging it out over the same bits of Terra Firma, but maybe Ocean know more than Reagan and Gorby.

The missions are very similar to Falcon, Fighter Bomber and F-16 Combat Pilot, with the usual destruction of tanks, convoys, bridges, factories and enemy planes. Visually these targets are exciting, but most of the terrain passed on the way isn't. The mountains have large invisible collision detection areas and roads appear chunk by chunk, destroying all credibility.

The cockpit displays are the best part of F-29, with radars sweeping from side to side, and missile cameras showing the full impact. Display panels can be altered to show a variety of instruments, including a scrolling map which constantly shows your direction. This makes navigation easy, which is useful because you often can't tell one bit of land from another when you look out the window.

F-29 looks and feels really exciting, especially during heavy fire in the target zones. The range of colours is realistic and they are complemented by the excellent cockpit design. There are eleven possible viewpoints, internal and external, but not enough player-control over them. It's impossible to do the old Falcon trick of watching yourself land from the control tower or even look around the outside of the plane.

Sound effects are well-matched to the game's atmosphere. If the engine noise in Falcon annoyed you, you'll love the sound of the F-29 powerplant. Cockpit controls are enhanced with a good solid bleep, so you know for sure you've hit the button even if you're too busy actually to check the panel.

Sadly, F-29 is lacking any music, a major oversight that's especially evident during the long, well-presented front end sequence. This makes disk-loading boring and does nothing to set the scene.

There's no denying F-29 has instant appeal, but after a few missions you're left with the feeling that you've seen it all before. There's nothing particularly revolutionary about the game, so unfortunately you very probably have.

For newcomers to the flight sim world, it's an excellent game because it's so easy to fly and land. Hardened sim-freaks will enjoy it for a while, but scrape under F-29's glossy surface and there's nothing more than a rusting hulk. A good game, but a lousy simulator.

Good game, lousy simulator... But, for newcomers to the flight sim world, it's an excellent game because it's so easy to fly and land.