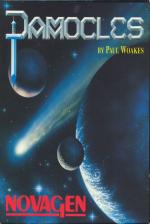 After four years pottering about in the garden, it's time for all you ex-Mercenary bounty hunters to return to the action. Damocles, the long-awaited, earth-shattering sequel from Novagen is at last upon us. Neil Jackson talks to Benson, his shipboard computer, on the long, long journey into the heart of danger... 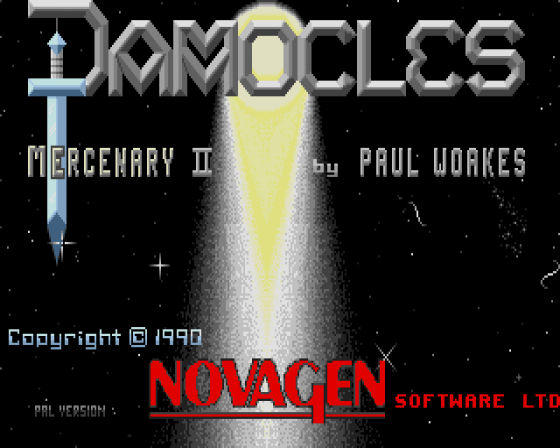 If the prospect of thermoglobal nuclear greenhouses and ice-age, polar eau-zones has you shivering under the bedclothes babbling with fear, then Damocles is not for you. There are far more catastrophic ways to die if you look for them, and if you're a cash-loving mercenary you'll probably find them.

An old Greek legend tells of Damocles (a distant relative of Johnocleese?), who congratulates the king on how jolly nice it must be, being king and that. The king thought differently and showed Damocles how kingship really felt by hanging a huge sword, business-end down, over his head at a dinner party. It was attached to the ceiling by a single human hair. Damocles, as it were, got the point.

The legend neatly illustrates the death-threat hanging over the planet of Eris, where your game begins. A massive, planet-splattering comet (called Damocles, hence the title) is on collision course for Eris, whose leaders show similar bureaucratic inertia to the leaders on Earth. Nowt has been done except some talking, a bit of under-funded research and some more talking. They did send for you though, about four years ago, but had just about given up on you. 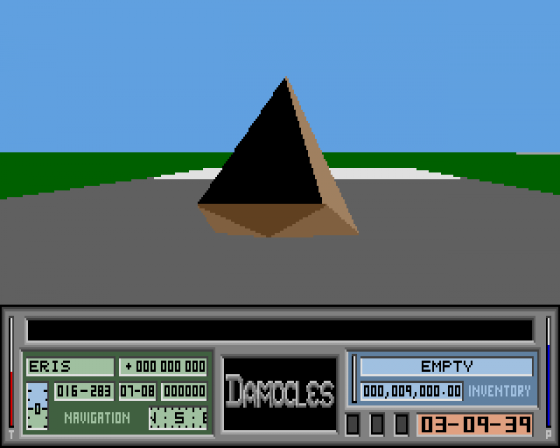 Arriving on Eris on a computer-controlled flight, you meet Benson, your ninth generation personal computer. In best Douglas Adams tradition, Benson (via his one-line text window) is sarcastic, immensely intelligent and bored still with the whole human/computer thing. He knows where to go, how to get there and which cutlery to use for the first course, but sure as hell ain't going to tell you until you work it out for yourself. Then he'll tell you.

His main purpose is to prevent you from flying too fast near the ground, and managing inventory and navigational systems. He also reads documents which are fundamental to the whole Treasure Hunt-type plot.

It transpires that you have a mere three hours to save the planet by either destroying or diverting the comet. Not surprisingly, the entire planet has been evacuated and you must find the solution yourself. Even the Eris state president, a chess-playing breadhead called (ahem) Margaret has run for cover and only communicates via Benson. 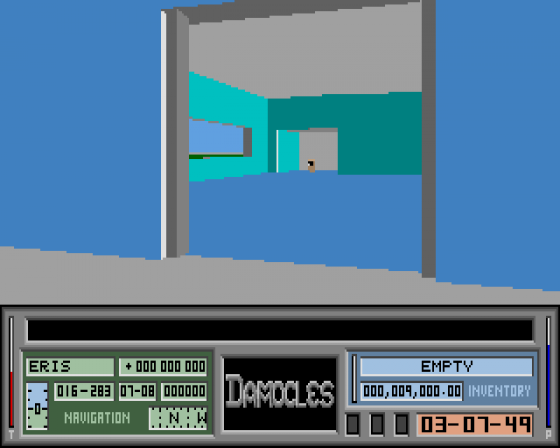 Your first task is to find her office and read the Damocles file which offers an insight into the problem and a possible solution. It seems a Professor Hantzen has been working on a massive Novabomb which could destroy Damocles, but he abandoned the project just before completion. After a game of chess he had a mega-tiff with the president and nipped off for a protracted sulk. If you can find his lab, you might, just might, be in with a chance.

You can walk or (considering the short time limit) run between locations on the planet surface. If you pick up a key from the spaceport office you have access to the high-speed car parked outside. It's simply a matter of point-and-squirt to control. Get in and out by pressing B(oard) or L(eave), select a forward speed (1-0 on the main keyboard) and hang on to the joystick. Staying on the road isn't absolutely necessary, but it helps navigation. Those all-important brakes are on the Spacebar.

If you can find them, alternative modes of transport are available, but you may need a key to use them. Aircraft cut down journey times and provide incredible views of Eris' earth-like surface. The planet is split into five islands so you can't visit them all just using a car. Use planes to island hop and cars to get around once you've landed. 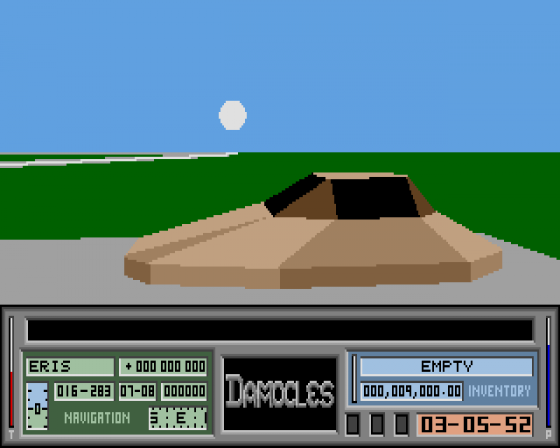 The spacecraft are best of all because they have the ability to leave the planet. A tap of the Escape key jettisons you at breakneck speed through the outer layers of the atmosphere. The whole planet fills the view, and then shrinks to reveal five shadowy moons. These include the oddly-named Vesta (home of packet foods perhaps?) and Lucan (so *that's* where he went). Before long the entire system vanishes to a tiny dot and the only visible object is the massive sun Dialis.

Be warned though, for interplanetary travel has an unpleasant side effect. As Einstein (confusingly explained: time slows down for space travellers (but they don't notice it), while relatively, time passes faster on planet surfaces (and they don't notice it either). It's all got something to do with gravity dictating the speed of atomic clocks and other Tefal-head type stuff. What this means is the countdown clock that Benson displays simply whizzes around when you travel fast in space.

Your first space flight will probably result in Eris copping it full in the face from Damocles and showering planet crust throughout the galaxy. It's worth looking at a few times just for the effect. The moral of the story is to save your position before any space-flight. It's easy to get lost, and time slips through your fingers like sand. 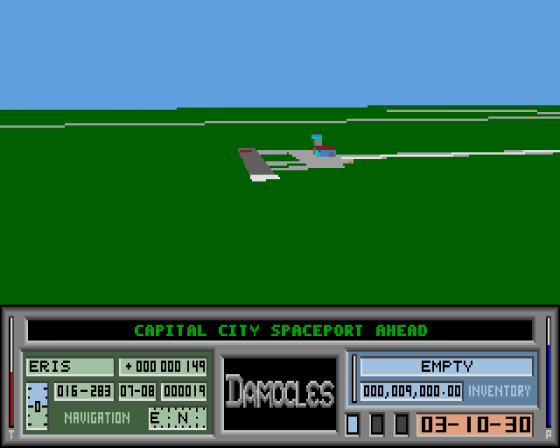 A nice feature of the game is that you don't get the usual "You are crap, Game Over" when you mess up. You can keep on going, safe in the knowledge that it can't get any worse, and examine literally anything you fancy. There are nine planets and nineteen known moons to explore, but not surprisingly if Eris has "hit the big one", then you aren't going to find any clues there because Eris is in bite-sized chunks floating round the galaxy. When you've had enough you can re-start and put plan B into action.

There's a sneaky way to save time, and that's by travelling faster than time itself. If you follow the trail of well-hidden clues you may locate a teleporter. These are strategically positioned around the galaxy, some on inhospitable moons and others deep in the bowels of locked buildings. It's not immediately obvious what they are when you first find them, but without giving too much away, *you can't pick them up*.

The tutorial scenario is to blow up Damocles using the Novabomb, but because the teleporters enable you to cover more ground, they provide seductive glimpses of alternative solutions. As a mercenary, you should always be on the lookout for other ways to get the job done and maximise the cash.

If you can save Eris without destroying the comet, you stand to make some serious bucks. This is because the usual bunch of speculating pinstripes reckon there's money to be made out of a "pet" comet in the tourist market. Not that it matters a monkey's to you; why not have a bash for the cash? It means you have to do a lot more hunting to find one of the alternative solutions, but there are reputedly five ways that it can be done.

If you can't be bothered, or if you have a thing against comets, you can safely trudge along the most obvious trail, build the bomb and cream the comet. This still isn't particularly easy. You have to be on the alert for the slighest clue and search everywhere you go. This takes time, and on the way you'll experience some odd setbacks. A nearby planet, for example, is home to a large number of estate agents (who've all evacuated) and the cities are full of their old offices. Take care when you enter them, because there's one thing estate agents are renowned for, and it's not giving you money. You'll find out the hard way, but some good may come of it - if you're lucky.

You might also stumble upon trading posts, large buildings with huge picture windows facing the street. Put your nose up to the window and you might see an object in the centre of the room. Behind it, on a large black sign is the current price. If you have enough money, you can enter the shop and buy the disputed item.

You may find an empty trading post, but this isn't necessarily bad news. Enter the display room and the black sign flashes up the offer price for the object currently selected in your inventory. Press the left and right arrows to cycle through your possessions, and the board makes an offer for each item in turn. If you get a good deal, drop the object by pressing the down arrow.

This method of trading may be easy, but it means you can only buy or sell one item at a time. To buy something with the profit you've made from an exchange, you need to find another trading post. Like most of the places in the game they don't exactly jump up and down and say "I'm a trading post". Unless, that is, you find a handy device called the A To Z Computer, which can be opened and left on constant display.

The A To Z guide tells you the name of the nearest building, even when you're flying at high altitude. You can fly in a systematic pattern over cities and islands to find the one you really want to land on, which saves heaps of time. The A To Z even handles planet-hopping by indicating the nearest planet.

There are plenty of other objects which are useful in your quest and the ones for the Novabomb solution are well-disguised. If you're not sure about the thing you've just picked up, press Enter to examine it in the Damocles window. If it can be used or read, the display alters and gives you either an index or a simple switch. Some of the most powerful objects in the game look really ordinary, so check them all.

Damocles is bursting with atmosphere; after a simple title screen you're immediately plunged into the captivating plot. The control panel isn't visually stunning, but you spend most of your time checking the text and watching the world outside so you don't really notice. At least it's easy to read and provides all the guidance you need via Benson and the display windows.

The view of the game world is excellent, with the exaggerated perspective reinforcing the feeling of being there, at the same scale as the buildings, and the display's fast update speed being crucial to the illusion of fluid movement.

There are no major-league show-stopping sound effects. Instead, there's an engine 'whooosh' related to your speed, and the bleep-burble-bleep of Benson's teletype. Strangely the absence of music or samples doesn't register. By the time you notice it, you're already sucked into the plot and it just doesn't matter.

You can have masses of fun in Damocles just playing with the automatic doors, looking out of ninth storey windows and shooting through tropospheres at a million miles an hour. You really feel as though there's nothing you can't do... and nowhere you can't go.

The superbly detailed plot peels back piece by piece to reveal a wealth of intrigue, twisted logic and dry humour. There are some excellent observations of human behaviour parodied in the Erisian way of life, with Post Offices losing important parcels and an apparently sincere president who is extremely manipulative with money.

Damocles keeps pulling you back to the screen, no matter how much you want to go to bed. There's always something to do and maybe just enough time to try it. Switch on the coffee-pot, sit down, and watch the dawn come up again on Eris. Chances are the same will happen outside your window.

Damocles keeps pulling you back to the screen... The superbly detailed plot peels back piece by piece to reveal a wealth of intrigue, twisted logic and dry humour. 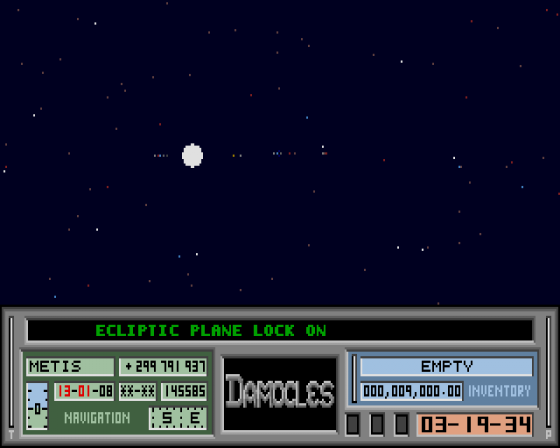