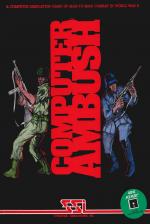 This is a quote taken from The Art Of War by Sun Tzu around 500 BC which makes reference to the tactical deployment of troops in a battle. Computer Ambust from Strategic Simulations - SSI - is a wargame based on this theme and one that superbly captures the nerve-tingling excitement and fear of war.

The game puts you in command of a troop of American GIs in France during World War II pitted against a squad of German soldiers in a small village.

You can choose whether you want a computer or human opponent, and depending on your choice you are offered a list of different scenarios.

You can select from various options such as sound on or off, whether you can see the enemy or not, and how long each play turn lats. These will affect the game, so choose wisely.

As with all SSI simulations, the game is split into different sequences of play, or phases as they are known - entering commands for the deployment of troops, allowing the computer to resolve the battle situations, receiving reports on the results and save a game.

A map of the village can be displayed at any time but the full map is too large to be shown in its entirety. When this option is chosen you are asked which row of the map you want to appear on the bottom of the screen and only segments are shown.

Because the game is based on the individual actions of all soldiers, each has his own characteristics which affect his actions within a given scenario - very similar to characters created in fantasy role-playing games.

The players' characteristics include rank, name, body weight, physical strength, dexterity and so on.

Each soldier can be given many different orders, entered in an abbreviated form. For example, PB means prepare bayoney and HH is the order to engage in hand-to-hand combat. At any time during the game any soldier's status report can be called giving, for instance, his position or any wounds he has received.

The move command is brought into play by using M followed by parameters that control who goes where, and the distance and manner in which progress is made, for example, crawling or running.

The rules here are quite involved, but are explained in great detail in the manual.

Three types of weapons are available - fire types (bolt action and automatic rifles), explosives (hand grenades) and hand-to-hand weapons (knives and bayonets). Here again, the rules are involved, but they are well covered in the literature.

One section contains dossiers on the individual soldiers on both sides. I particularly liked this as it made for interesting and amusing reading.

The American soldiers have what can only be called Yankee names such as Sergeant J.C. "Buck" Padooka, Corporal Rodney "Rich-Boy" Richfield and P.F.C. Aloysius "Gunner" Garrity.

The same applies for the Germans, with names like Obergefreiet Erick Braun and Obergefreiter Ludwig "Lover" Schneider. I was left in no doubt who I was fighting.

This is quite a complicated game to get to grips with but once you have achieved a good working knowledge of the rules the simulation will flow quite smoothly - and you do have the help of quick reference sheets.

The computer interpretation of the mapboard is well done and very easy to follow. And the map you can draw on is an invaluable aid and a very good idea.

I found it very easy to totally immerse myself in this challenge and there was more than one occasion when I was panicking when the Germans had me cornered. Even though it carries quite a hefty price tag - £19.99 - it's well worth every penny.

I found it very easy to totally immerse myself in this challenge and there was more than one occasion when I was panicking when the Germans had me cornered.