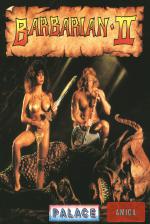 Since Palace's barbarian first heard the exhortation 'Prepare to die!', few games have been seen on any format so testing or so bloodthirsty. From its inception as a beat-'em-up on the C64 through to an arcade adventure which combined combat with maze exploration, Palace have consistently improved upon their original idea. Barbarian II on the Amiga is no exception.

Amiga owners who complain bitterly about straight port overs from the ST will be placated somewhat by the extra effort that has gone into their version, or at least the impressive introductory sequence. Reminiscent of a really hot demo in its confidence and flourishes, a skeletal hand pierces a still of the barbarian and beckons "Follow me". You are then given a verbal command to choose between the hirsute neanderthal or the spriteliness of Maria. Then, as you're told to insert disk two a skeleton appears laughing hysterically - presumably at your impending doom. It's extremely impressively handled.

The idea behind the sequel is to pursue Drax to his castle and stop him from doing any more damage. This takes you through three levels of action, before you manage to confront The Living Idol, a demon who, finally, is all that stands between you and Drax. The levels are split into three environments: you begin in the wastelands, with volcanoes on the horizon, lava streams and pits which have to be leapt across; this is followed by the caverns, dark and foreboding, these contain streams of slime and more bottomless pits; finally you have to make your way through the castle dungeons - pitjumping has to be timed to perfection here or a beastie is likely to pop out and munch you. Succeed this far and only the demon and Drax await.

The layout of the maps is identical to the C64 version, but the location of the various magic objects you need to collect has changed. These are crucial to completing the game. Most important are items like keys which open the portcullis in the castle and the shield which guards against the demon's fire, and the jewel which disables the Living Idol which you must pass before you can get to Drax.

Barbarian II is essentially the same challenge it was on the C64. Hack your way past the gruesome array of creatures that pop up every few moments, jump and run carefully through the screens and locate the objects. The nature of the game hasn't developed any. That might disappoint the more demanding among you, but it's hard to criticise this conversion. The graphics are large and well drawn. There are plenty of neat effects to complement them as well - head-chopping, mauling and merciless clubbing - all accompanied by brilliant sampled noises. Sound is superb with numerous grunts and groans, a brilliant dropping cry as you disappear down a pit and beefy thwacks as you lay into the beasts. The manic clucking of the mutant chicken will be enough to send you running in the opposite direction eventually.

There is something undeniably 8-bit about Barbarian II. Its conception and gameplay are tried and tested, but that really doesn't put me off. It's too well executed. It's still a must for fans of decapitation everywhere.

Even on an Amiga, there is something undeniably 8-bit about Barbarian II. Its conception and gameplay are tried and tested, but that really doesn't put me off. It's still a must.