Published in Your Sinclair #14 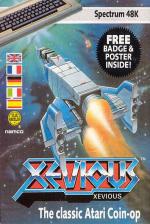 Eons ago, millenia before prehistoric man trod the earth, even before the ice age glaciers swept across Europe and altered it forever [Get on with it! - Ed]. Anyway, a very long time ago indeed, the earth was colonised by the Xevious people. This advanced civilisation ruled for centuries before moving on to better things. But now they've returned, and they want their planet back. Not very chummy, eh? Not surprisingly this has not gone down too well with the earth's ruling forces, so they've sent you out in your Solvalou spacecraft to give them a darn good thrashing (see me in my study, Simpkins).

Xevious is another scrollling shoot 'em up, a coin-op conversion in the traditions of Uridium, WAR and Lightforce. Enemy forces take the form of ground-based missile systems and flying whatchamacallits which dodge around in a thoroughly tricky manner. These Xevious are devious! Things get more difficult of course when you approach a flotilla of floating mirrors, as these'll reflect your fire back at you unless you get out of the way smartish. At the end of the line you'll face the Andor Genesis Mother Ship, a huge steaming mother of a ship that may take a bit of budging.

With this sort of conversion it seems to me that programmers have a very simple choice - graphic quality or speed. US Gold has gone for speed. So while Xevious may not be as impressive to look at as, say, Lightforce, it's much more fun to-play. Uridium managed to combine the two, with spectacular results.

Xevious is fast, vicious and enthralling. If you can forgive graphics that never realty rise above the mundane, you should get a lot out of it.

Xevious is fast, vicious and enthralling. If you can forgive graphics that never realty rise above the mundane, you should get a lot out of it.