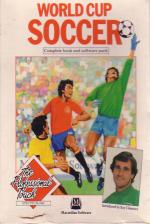 The tape is double sided (a game of two halves you might say) with a fact file and a game simulation - which should have you over the moon. The simulation starts with a warm up of heading and penalty skills that'll test your arcade abilities. Good graphics here. You then move on to management. Pick which country you wish to be, then select a squad or accept the programmed one. I can understand the computer might struggle to give you the Cameroons squad, but If you choose to be England you'll be given an all-time greats squad of multi-nationals. If only Pele really was English!

The computer will now pit you against another nation in your section. The first half is unseen - but injuries and scores with times are flashed up. In the second half you can compensate for any program failings by using the heading and penalty skills first seen at warm up.

But whats this? Kuwait and New Zealand seem to do uncommonly well for soccer minnows and the Great Shilts has become goal scorer as well as goal keeper. Still, this ought to keep you happy until the real thing in June.

Ought to keep you happy until the real thing in June.