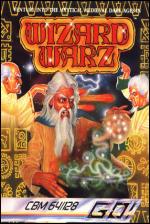 The seven greatest magicians are ripe for conquering. As a trainee sorcerer with little power and no experience, your ultimate aim is to become chief wizard by defeating them in combat.

The game is played over three multi-loaded stages, each of which involves combat with any of 30 types of monster: these range from the relatively weak great wasp through such eldritch demons as trolls, crystal men and minotaurs, finally to a terrible sorceress. Fortunately, the player is armed with any of nine spells ranging from a fireball to a wall of stone.

Before play commences four spells are selected from a list of nine, their relative effectiveness detailed in the instructions. The first stage involves returning six items to appropriate towns in an eight-way scrolling landscape bounded by a great sea. These items are held by monsters which lurk in forests or wasted plains; approaching one launches the player into a combat sequence in the monster's dimension.

Both the player and his oppoent have three status levels, mental, physical and spiritual; if any of these are depleted by the enemy's spells, the game ends. Successfully defeating a monster releases an item which, if returned to its town of origin, awards the player two food points, thus replenishing lost energy.

The second stage involves combat against any of thirty different monsters, selected by the player. When killed, these monsters relinquish predetermined items from which a wand, a ring and a dagger are required to pass to the third level.

In the final stage the player faces the seven Mages in order from Wolf Lord to Dragon Lord. Each wizard is safe in a stronghold guarded by his loathesome familiars; defeating these rewards the player with a battle of spells against their master. After defeating a mage the player's attributes are, if not already sufficient, increased to match those of his next opponent.

If it weren't for the abysmal on-screen display, this would be compelling. The concept is excellent, though very much cast in the Druid mould: the limited range of spells at your command is offset by the hordes of horrible demons facing you.

The game relies a lot on atmosphere, generated by its graphics and sound: unfortunately, both are substandard. Graphically, the tiny screen display, miniscule sprites and jerky scrolling ruin any sense of power or excitement in exploration and combat.

Sonically, the effects are weak and silly, with the same resultant effect. The only reasonable part is the average title track, but ten pounds is a lot to shell out for some decent music. If you're prepared to stick with it, and ignore the lack of polish, it's a reasonable game; otherwise, try before you buy.

The role-playing aims of this cocktail of genres at first seem well accomplished. The instructions list 44 enemies and eight selectable spells to slay them with, and the screen display has a suitably medieval look to it, so fantasy gamers would appear well catered for.

This impression is tainted after actually playing the game, however, because of two flaws which come to light after a few minutes' play. The player's interaction with the very large map is, frankly, silly.

A small portion of it is displayed in a round window which is just too small to give an adequate view of the current location. Something that isn't mentioned in the instructions is the fact that the player has a pair of ten-league boots at his disposal which allow him to cross mountains as if they were molehills.

Surely the different terrains could have had varied effects on the player? The other irksome feature is the way that spells cannot be replenished after they have been exhausted.

In one encounter with a triffic, every hit I took removed one of my four spells, leaving me with one option - dying - and this I did without remorse.

Presentation 32%
The instructions are good, but the unattractive and indistinct screen display ruins the action.

Graphics 18%
Jerky scrolling, miniscule sprites and uninspired use of colour throughout.

Sound 44%
The sound effects are simple and soon grate, but the title theme is OK.

Hookability 26%
Wandering around is uninteresting and the action is clumsy, but the combat sequences are sometimes enjoyable.

Lastability 41%
If you ignore the awful presentation, the task is both large and challenging.

Overall 30%
A very poor interpretation of an excellent concept.

A very poor interpretation of an excellent concept.