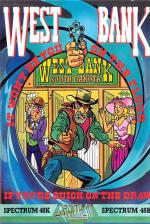 In the game based on the coin-op Bank Panic, your job is to take money from the hardworking people of Soft City and protect it from the outlaws. Such is the life of a bank clerk in a wild west town caught in a gold rush.

The bank has twelve doors of which three appear on the screen at any one time.

One of the game's nine characters will then come to each door and you have to take the money from a citizen or shoot an outlaw before he shoots you. Shoot a citizen and you lose one of your three lives.

This continues with the doors opening and closing at an alarming rate presenting you with split-second decisions whether to take their deposit or deposit some lead in them.

Once you've collected money from all twelve doors you've completed the first phase. Complete nine phases and you're halfway through the game.

In between phases you are in a straight gun fight situation against three killers who you must shoot after they draw but before they gun you down. A big bonus score can be won in these fights as can extra lives but a mistake could lose you a life.

Assuming you survive it's back to the bank for more customers. These include Daisy the jeweller's daughter (a real gem!), Alfred and Joe Dalton (outlaws that you must shoot on sight), Bowie a dwarf who keeps a bomb under his hat and a dandy called Julius.

The outlaws and the law-abiding citizens present no real problems as they can be dealt with quickly but the real tricky ones are the characters like Julius who may give you some gold or he may shoot you.

The temptation is there to kill him as soon as you see him (remembering how he shot you in the last game) only to lose a life for shooting an innocent man. The other danger is if you ignore him to deal with some other doors you'll probably be gunned down.

The game sounds almost too simple but is ridiculously addictive as the combinations of the characters that are thrown at you will keep you on your toes and will guarantee that you will have 'just one more game'.

The game sounds almost too simple but is ridiculously addictive... Will guarantee that you will have 'just one more game'.